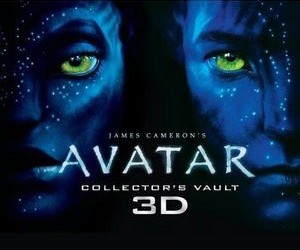 To coincide with the DVD/Blu-ray release of the Avatar: Extended Edition – you know, the one you didn’t hold out for and now wish you had – on the 15th November, Titan Books are releasing the intriguingly titled Avatar: Collector’s Vault 3D. This oversized hardcover “interactive book” comes in a slipcase and contains over 60 special features and removable pieces; and, of course, a pair of 3D specs with which to view them.

I’m not sure what those special features entail, exactly, but can only imagine that the package will be in line with the deluxe Star Wars tomes that have been released over the years, only with more “coming atcha off the page!” factor. As you make your way through James Cameron’s Avatar Collector’s Vault 3D, you will journey through stunning terrain that few human eyes have seen — the world of the Na’vi, the 10-foot-tall blue-skinned humanoids who inhabit Pandora. They have a mystical connection to Pandora’s natural world, which they believe to be nurtured by and inextricably bound with Eywa, the goddess of life they worship.

Enjoy natural wonders like the floating Hallelujah Mountains and Pandora’s natural bioluminescence. View the moon’s amazing creatures, ranging from the gentle, spirit-powered woodsprite to fearsome predators such as the thanator and the great flying leonopteryx. This interactive book also contains 3D glasses to further enhance your viewing experience, plus 3D Pandora removable profiles. If you are inspired by the awesome beauty of Pandora, James Cameron’s Avatar Collector’s Vault 3D is for you!