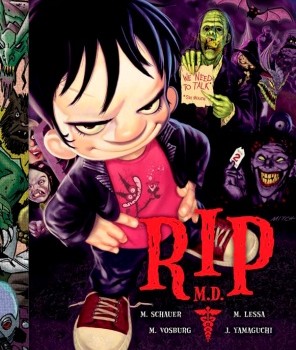 RIP M.D is the debut graphic novel from The Angry Beavers creator Mitch Schauer. The creepy, fun-filled, all-ages adventure introduces Ripley Plimpt, an 11-year-old boy whose ordinary life is turned upside-down when he discovers that monsters are not only real, but are also in desperate need of his help to overcome their very real problems.

RIP M.D. was written and illustrated by Schauer, an Emmy® Award winning producer, writer and designer. Comic book veteran Mike Vosburg has brought his innovative, illustrative style to the artwork’s inking, and Michael Lessa and Justin Yamaguchi have created a whole new look for RIP M.D. with their cinematic color and special effects expertise.