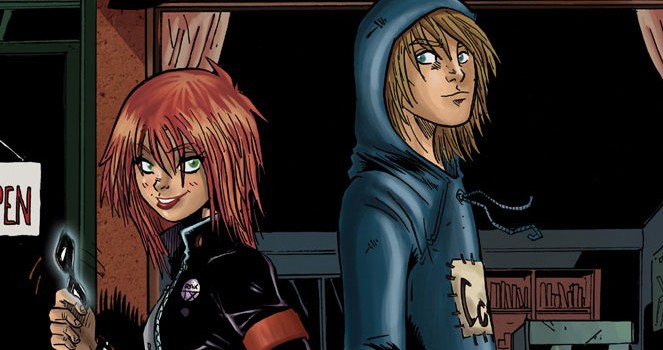 Ever since Stan Lee introduced fallible heroes with feet of clay, comic writers seem intent on convincing us that being born with superhuman powers is the worst thing that could ever happen to anyone. Take Brian, the protagonist of 215 Ink’s latest graphic novel Brian & Bobbi, a teenager with the power to fly. Brian’s ability inexplicably went unnoticed during adolescence, and he’s now content to toil in a record store while his talent goes untapped.

Into Brian’s life waltzes Bobbi, a spoilt, manipulative punk chick whose father is the 329, a genius superhero who can manipulate objects with his mind. After knocking Bobbi’s mother up, the 329 paid for their life of luxury in exchange for keeping his public image intact. Much to her chagrin, Bobbi has not inherited her father’s powers, and on seeing Brian soar the skies one fateful day, decides that he will be her conduit into the world of costumed crime-fighting. Bobbi, who exploits her inherent haughtiness and unfeasibly short skirt to get boys to complete her school work, is one of the most dislikeable comic protagonists I’ve encountered in some time; though by this book’s final pages it’s apparent that such a reaction is writer Adam Wilson’s intention. Franco Viglino’s work bears the occasional inconstancy that marks a fledgling artist’s work, but his illustrations are clean, appealing and convey the story adeptly.

This is a book that will probably appeal to fans of non-superhero comics; the teen drama elements of Brian & Bobbi play a larger part than the superhero shenanigans. Indeed, when Brian finally adopts his persona “the Coelacanth” – originating from the misinterpretation over a rock band badge he has sown onto his hoodie – the ensuing action scenes lack the character-driven charm of the intimate moments that bookend this volume. But it’s a nice enough little tale, and the surprisingly emotive ending is more than enough to justify a sequel.