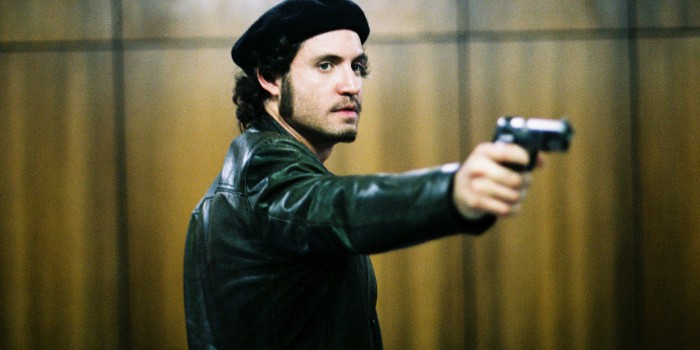 Sidestepping the controversy that Aaron Sorkin’s Social Network script recently attracted, Carlos begins with a disclaimer informing us that it’s purely a work of fiction based on real events. Surely, the very nature of biopic-making is to pack historical events down into a condensed fiction, complete with snappy dialogue and the magic of editing… Anyway, this lush 5½ hour French-German miniseries paints as complete a picture of reviled/revered terrorist Carlos the Jackal as is conceivable. A truly global production, and one that flitters between French, German and English dialogue, Carlos is irrefutably a cinema-worthy effort. Produced on an $18mil budget, this enthralling epic covers over ten countries and two decades, taking us from Carlos’ pro-Palestinian activism in the 70s to his final years of freedom during the conclusion of the Cold War.

While director Olivier Assayas occasionally lets an anachronistic rock soundtrack blight his movie/series hybrid, he triumphantly refrains from glamorising or vilifying Carlos. Instead, the film offers a chronological account of the onetime world’s most wanted, if at times an awkwardly disjointed one. While there’s little of the romanticism that might guide a similar Hollywood biopic, the drawback is that Assayas and Dan Franck’s script is a little too detached for its own good, and occasionally feels like a cops & robbers caper minus the cops.

Édgar Ramírez delivers a measured, understated interpretation, putting on the pounds for the Jackal’s twilight years; which is likely to overshadow his performance in the eyes of critics just as Nicole Kidman’s prosthetic nose did in The Hours. Ramírez brings a dichotic presence to Carlos; he’s charming but never likeable, cocksure yet cowardly, both manipulator and manipulated. And, yes, the back-and-forth transition from buff physique to paunch and man-tits is a remarkable one.

Carlos is available in two formats: the original 3-part miniseries –referred to as ‘The Trilogy,’ as if in denial of its serial origins – and a heavily trimmed feature length version that hit cinemas a week before the DVD release. While I’ve yet to see the movie cut of Assayas’s biopic, I’m not entirely sure I want to. This series’ strength is in its comprehensiveness. An adamantly fictional account it may be, but Carlos paints a mesmerising portrait of a complex political climate; one which offers frightening insight into our own.

DVD Extras: A Making Of featurette and an interview with Edgar Ramirez.

Carlos will be available on DVD and Blu-ray from 1st November.