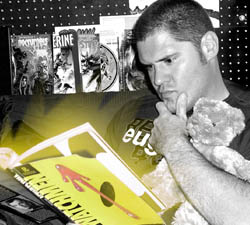 The Chicago based artist has also designed posters and promotional art for Chicago bands Daemon Familiar, Unibrow and Moses Gun.

“Tom’s style is beautifully balanced and intricate, with graceful line work,” Beatty gushed. “We’re very lucky to have him in the new Indie Comics Magazine.” Kelly has won several awards, including the Wayne Wright Key for Excellence and the Pennsylvania Keystone Silver Seal.

Each issue of the new comic will feature eight full stories from eight different independent comic book creators, said Beatty. Short biographies and contact information are included with the stories so readers can easily seek out more of the creators’ work. Kelly accepts commissions through http://tommm9.daportfolio.com.