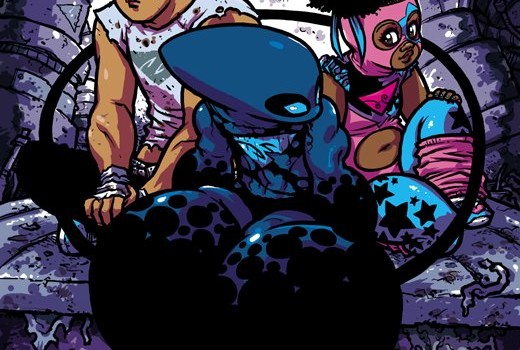 Press Release: Scout Montana has just started to come to terms with turning into a mutant and becoming a superhero, but fate decided that isn’t enough complication in the life of the teenage vigilante. In the second volume of Ross Campbell’s critically acclaimed SLG Publishing series Shadoweyes, as Scout grapples with ethics and tries to balance friendship with crime-fighting she must face a truly formidable opponent: love.

Shadoweyes in Love, set to be released in April 2010, follows up the debut book of the series, 2010’s Shadoweyes, which was on the American Library Association’s Great Graphic Novels for Teens and Popular Paperbacks for Young Adults lists and received a starred review in Booklist. While volume one focused on Shadoweyes’ origin story, Shadoweyes in Love encompasses more characters and larger themes. “Shadoweyes is figuring out where she stands or doesn’t stand as a hero or antihero and dealing with the violence that comes with being a vigilante, but it involves the other characters a lot more,” said Campbell. “Everything from volume one gets kind of amped up, which was both a blast and difficult to write. Definitely some new territory for me and I’m having a lot of fun with it.”

Among the other characters whose lives form part of Shadoweyes’ world are Sparkle, a bubbly girl who has vigilante dreams of her own; Noah, a young man Shadoweyes is drawn to who brutally combats crime with a crowbar; Kyisha, Shadoweyes’ former best friend and Noah’s girlfriend; as well Shadoweyes’ mother Max, who must support her crime-fighting daughter as Scout continues to transform and find her place as Shadoweyes.

Shadoweyes in Love features the black-and-white artwork depicting the decaying cityscape of Dranac, Campbell’s diverse character designs, and dynamic action. A third book in the series, Shadoweyes Unmasked, is planned for 2012.

Established in 1986, SLG Publishing is a San Jose, California-based publisher of comic books and graphic novels. Some of SLG’s more notable comics and creators have included Johnny the Homicidal Maniac by Jhonen Vasquez, and Zombies Calling by Faith Erin Hicks. More information on the company can be found at the official website www.slgcomic.com