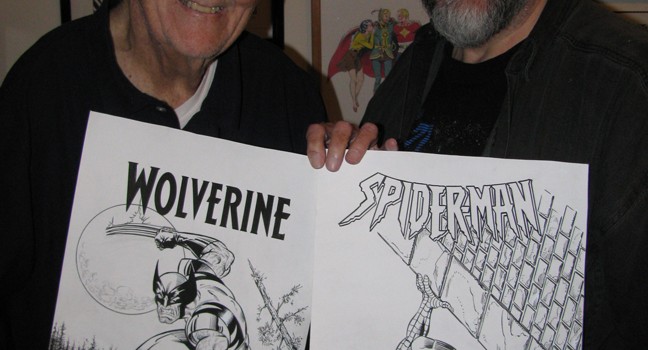 The Inkwell Awards, a non-profit organization devoted to promoting the art of comic book inking, will auction off the artwork for their sixth annual Joe Sinnott Inking Challenge. This season they have an additional “spin-off” Challenge program, The Sinnott Inking Challenge Spotlight, which focuses on the pencil art of award-winning creator and DC comics co-publisher, Jim Lee. The fundraiser event debuts on March 13.

“The original Sinnott Challenge has been a growing success,” said Bob Almond, founder and director of The Inkwell Awards (AKA “The Inkwells”). “More artists, both veteran professionals and talented amateurs, were participating and auction results were improving with each event, so we decided to add something new to showcase other contemporary, fan-favorite talents but on a smaller scale with more established artists who may not have participated in the original program. It took almost two years to develop but the results are well worth the wait.”

The original Inking Challenge program educates the public about inking by having industry legend and Inkwell Special Ambassador Joe Sinnott do a tight pencil of a character (this year, Marvel’s Spider Gwen) plus a “breakdown”, or rough sketch (Marvel’s popular Deadpool). His art is scanned and the file sent in blue-line form to various inkers around the globe to finish and/or embellish in ink.

Ink artists contributing their skills this year include Bill Sienkiewicz, Richard Bonk, Trevor Von Eeden, Joe Orsak, Keith Williams, Mike Barreiro, Ken Branch, Andy Smith, Neil Vokes, John Dell, Bob Wiacek and dozens of others, including members of the Sinnott family. All submitted art may be viewed at The Inkwells’ ComicArtFans gallery. All pieces for this challenge are personally signed by Mr. Sinnott and include a certificate of authenticity. The Challenge Spotlight on Jim Lee program was significantly developed by former committee member Erick Korpi with full authorization from Lee and DC Comics. Much of the recruitment was subsequently carried out by senior contributor Joseph Goulart and finalized by Almond. All pages will be signed by the inkers and most, about two dozen, will be signed by Jim Lee. All will include a COA as well. Submitted pages at press time include those by Joe Sinnott, Bill Sienkiewicz, Klaus Janson, Wade von Grawbadger, Mark McKenna, John Dell, Scott Hanna, Kevin Conrad, Jay Leisten, Andy Smith, Jose Marzan Jr., Brett Breeding, Mike Sellers and Ken Branch. More are expected soon from Bob Wiacek, Mike Lilly, Sean Parsons, Dexter Vines and Walden Wong.

Almond added, “Much kind thanks to Jim, Eddy Choi and DC Comics for their cooperation, support of our program, and appreciation of ink artists.” Auctions for the Lee Challenge will begin March 13 on the Inkwells’ eBay store, alternating with the Sinnott pages each week or two thereafter. The art will later be collected into book form. Previous book collections in various editions, along with other merchandise, are available for donations to the organization through their Web Store.

The Inkwell Awards is an official 501(c)(3) non-profit organization whose mission is to educate and promote the art form of comic-book inking, as well as annually recognize and award the best ink artists and their work. Now in its ninth year, the organization is overseen by a committee of industry professionals and assisted by various professional ambassadors and numerous contributors. They sponsor the Dave Simons Inkwell Memorial Scholarship Fund for the Kubert School and host the Joe Sinnott Hall of Fame Award.