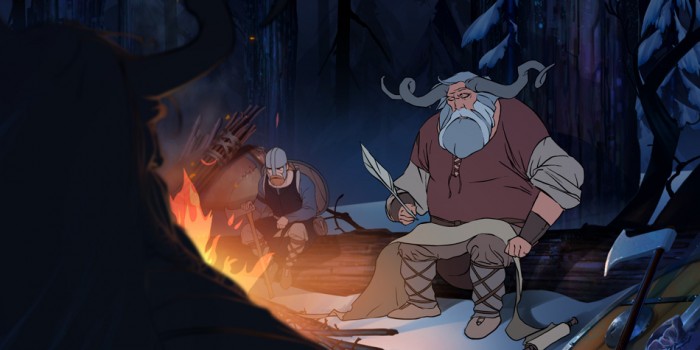 No matter how realistic looking video game graphics get, with their fancy polygon counts and their anti-aliasing wotsits, it doesn’t take more than a few hand-drawn animated cutscenes  to reduce me to the mental age of an 8 year-old gazing mesmerised at Dragon’s Lair.

Stoic, a studio formed from several former Bioware developers, has cruelly exploited such nostalgic weakness with The Banner Saga: Factions, the detached multiplayer component in their upcoming turn-based strategy game. Based on the likes of Final Fantasy Tactics, Factions is a joy to behold, from the tutorial cutscenes through to the gameplay itself, presenting a colourful Viking-themed fantasy world that is, according to the developer, inspired by the work of Eyvind Earle (Disney’s Sleeping Beauty).  Much of the haunting intro can be viewed below:

The Banner Saga: Factions is available from Steam as of writing. It’s free-to-play, but if you’re willing to level up at a leisurely pace, there’s a lot to get your teeth into before you will need to reach for your wallet.

At present, the game is suffering from server issues, laggy matches, broken matchmaking, limited and as such is a little difficult to recommend in its current state (update: many of these issues appear to have now been fixed). But if you do manage to get a game going, it has real potential. The gameplay is deep, the classes are excellent (if too similar in appearance) and the few attempts to diversify the stages (with the likes of hot coals) shake up your strategies more than you might initially take for granted. With its distinct art style, and a score by Journey composer Austin Wintory, Factions is testament to the significance of Kickstarter et al in bringing something different onto the market. I’ve played  about a dozen games and will also say this: all of the dozen-or-so players I’ve encountered so far have been friendly and well-mannered. My brief experience with the game has helped repair the damage done from the online shooters and MOBAs that recently had me doubting humanity. Not that I ever had much faith in it to begin with, of course. Still, I have every bit of faith in Stoic’s angry bearded Vikings.