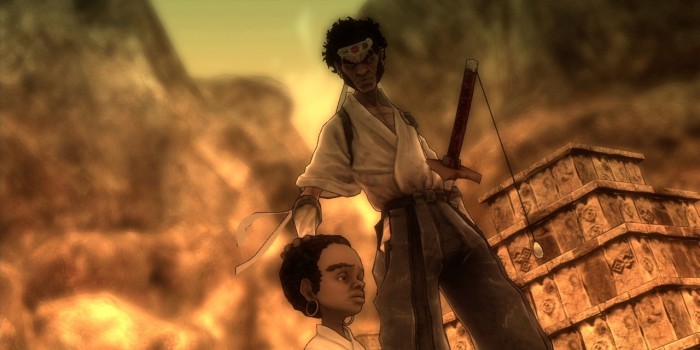 As the “are videogames art?” debate continues, it’s comforting to see that there are still games which don’t aspire to be anything but guilty pleasures. Afro Samurai, based on the Takashi Okazaki manga and subsequent anime, is such a game. Set in an appealingly futuristic Feudal Japan, the story takes it’s inspiration from animes such as Ninja Scroll and the Lone Wolf and Cub movies and combines them with an artistic style akin to graffiti art and the ever bankable commodity that is hip hop. With only a few minor revisions the game faithfully follows the plot of the anime, in which the hushed but functionally titled Afro pursues the “Number One,” a mystical headband that is given to the world’s greatest warrior, bestowing its bearer with divine power. Conveniently, the current Number One title holder also killed Afro’s father when he was a child. Samuel L Jackson, Ron Perlman and Kelly Hu all respire their roles from the anime, with Jackson voicing both Afro and the salacious Ninja Ninja, presumably a figment of Afro’s subconscious. Early levels recount a segment from Afro’s past, often from a different perspective, and while the cutscenes are suitably cinematic it would have been nice to see an original plot; fans of the anime who buy this game will already know the story, while those unfamiliar with the source material will be bewildered by the games inaccessible non-linear narrative.

Controlling Afro couldn’t be simpler, with the customary vertical/horizontal slashes and a kick button offering a standard range of combos, though button mashing tends to provide equally effective. There is a block button, though you’ll rarely use it, and the counter move Afro quickly learns proves vital in specific situations but ineffective when battling larger groups of enemies. The game does use an experience system, granting you health increases and new combos at each level advance, but since you’re be able to flurry through on the simplest techniques, you won’t really notice it. Surge have realised how vital it is the game resembles the anime, and designed the game around a HUD-free system. Characters develop a red sheen around their bodies as they approach death while a pendant hanging from Afro’s kitana acts as his focus gauge. The focus mode sends Afro into a slow motion monochromic mode (splattered with dashes of red for good measure) and allows him to utilise a range of charged attacks, the timing aided by a shimmer along his blade, to slice his enemies like a knife through tofu. There’s also a similar overfocus mode, which uses your entire focus reserve, and allows Afro to dash around the room while his opponents move with all the adroitness of underwater aquanauts. It’s a bold step that works for the most part, and showcases the distinct visuals brilliantly.

Ninja Ninja acts as a guide and comic sidekick combined, and acts as a sort of GPS, popping up when you need him, though if you happen to be looking in the opposite direction when he does appear he refuses to rematerialize for some time. He’ll also occasionally offer you a game of Body-Part Poker, which as the title suggests requires you to consider which limbs you alleviate your next three foes of. The prizes for a winning hand are nothing more substantial than experience, health or focus bonuses, but it’s a fun diversion and Afro Samurai could have done with more mini-games like this to shake the repetitive gameplay up. While the combat itself is reasonable fun, Afro is not without his share of control issues. Jumping feels floaty and unresponsive, while activating switches or doors with a kick action often requires several attempts. On one occasion I spent nearly five minutes lining Afro up to cut a length of support rope. The wall jump actions work only on designated surfaces, and these are often so inconspicuously placed that locating them requires a trial and error approach. While this isn’t too big a problem during the first half of the game, it makes the later levels virtually unplayable. I am known for my pacifistic attitude to videogaming, even during the most intense Halo or Gears online matches. Afro Samurai is probably the first game in over a decade to cause me to fling my controller at the nearest hard surface. No, it wasn’t my head.

The game’s levels all hail from the Silent Hill school of design. At one point you are required to pull two levers to pass through a large gate, yet while the first lever alone raises the gate high enough that Shaquille O’Neal could effortlessly pass under it, to progress you still have to find the second lever to fully open it. There’s also a fair amount of backtracking, and even the incentive of hidden experience point bears and skill unlocking memories is not enough to encourage you to explore the bland, recurring environments. The enemies Afro encounters are all virtually identical, often with only a simple palette change to differentiate them, and you regularly find yourself confined within invisible barriers while the game pits you against seemingly endless wave of identical victims. The battles themselves are plagued with camera issues, the invisible barriers frequently causing your viewpoint to be directed deep into Afro’s curly namesake while off-screen ninjas hack you to bits. The inventive boss fights are a highlight of the game and present an old school challenge, with the flamethrower wielding Brother 6 and a bazooka standoff being amongst the most memorable, but these too can often be won with cheap, unimaginative tactics; the aforementioned Brother 6 seems impossible at first, until you discover that pushing honourable tactics aside and repeatedly hammering the same button leaves him little opportunity to counteract.

Afro Samurai’s graphics capture the style of the anime perfectly, with character models exhibiting some nice textures, and the suitably anachronistic soundtrack “supervised” by the RZA is by far the best reason the play this game. The voice talent all do fine, though Ninja Ninja’s misogynistic and foul-mouthed “guidance” is seldom funny and Samuel L. Jackson’s fervent banter (“there’s something about your face makes people want to cut it off”) become tiresome extremely fast. For all its stylish flourishes Afro and company are all too self-conscious to actually be cool, and the game lacks the self-depreciative wit of similarly sadistic titles such as MadWord or Grand Theft Auto.

I can respect Afro Samurai’s unapologetically mindless stance and the game will likely earn its share of supporters. As a quick fix of visceral, slash ‘em up action it’s entirely serviceable, and compared to the majority of licensed games Surge have clearly put some thought put into it. In those rare  moments when RZA’s hip hop beats kick in just as a dozen swordsmen surround you from every angle, Afro Samurai delivers on its promise, giving players a sense of elegant omnipotence that almost justifies a purchase by anyone even remotely interested in the show, anime or samurai fiction. But for every enjoyable instant in Afro’s odyssey there’s another mired by inferior production values, frustrating design nuances and uninspired level design.

Were Afro Samurai a bargain-priced release or a series of episodic Xbox Live downloads, these shortcomings would be forgivable, but as a retail release the short-lived single player experience just doesn’t offer enough to warrant a purchase. If you fancy a weekend of undemanding but highly stylized carnage, you could do far worse than rent this game. But you’ll be amazed at how quickly that style wears thin and the carnage grows wearisome.