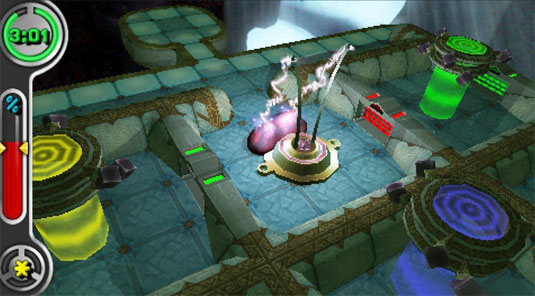 Unlike their movie industry counterparts, few games creators garner enough reverence to permit having their name placed in a game’s title. Archer Maclean, the British brain behind Dropzone and International Karate, amongst others, is one of those select few to have reached this level of accolade. Yet while his PSP debut Mercury launched to decent reviews in 2005, it is somewhat telling that the Maclean brand was dropped for the multiplatform sequel, Mercury Meltdown, which was developed by publisher Ignition Entertainment.

That is not to say that Mercury is not a good game, however, and with this original incarnation now available on PSN at a shockingly charitable £4.75, now is as good a time as any to take another look at Maclean’s ingenious little concept. Mercury combines the essence of Marble Madness with those hilariously lethal mercury puzzles that we used to have as kids. Y’know, the ones which are now banned, because the magic liquid metal component that endlessly fascinated children was deadly poisonous. Much like Super Monkey Ball, instead of controlling the droplet itself you tilt the level, slipping and sliding your ball of liquid metal through various challenges. Mercury was originally designed with a USB tilt-sensor in mind, as a sort of precursor to the Wiimote, and while that never transpired the PSP’s analogue nub works surprisingly well. Sure, you’ll need a steady thumb, but there’s rarely a time that your blob will roll to its doom because of the controls; instead that achievement goes to the camera, which often obscures the action completely, letting you teleport to some unknown part of a level only to slide into oblivion as a result of panic-stricken button bashing.

Those who do persevere with the irksome camera will find a surprising amount of variety here. Mercury’s three level types, spread across seven worlds, may not be superficially different, but offer a substantial enough change in pace or approach to keep the challenges fresh. Race levels are pretty straightforward, with an emphasis on getting just one tiny portion of your mercury to the finishing line as quickly as possible. The only slightly slower-paced Percentage levels offer a similar set of trials, but the finishing line (actually, it’s a square) is now replaced by a scale upon which a certain percentage of the mercury must be set – and with traps such as suction pipes and Pacman-esque enemies wanting a piece of your shiny stuff, it’s usually not easy.

For the more cerebrally inclined, there are also the puzzle-centric Task levels, which involve a set of coloured beacons that can only be activated by a glob of the same colour. Here you must dye your mercury and, on occasion, split it in two, dying each half separately and rejoining the two to create new tones. At the end of each world there are also several Combo levels and an elaborate Boss stage, though as you progress to more difficult stages the lines between these level types blurs, as you are forced to think fast and keep your methods varied. As a single-player only experience, Mercury’s two greatest failings are it’s length and it’s lack of replay value. Unlike a puzzle game such as Tetris, Zuma or Lumines, there’s little reason to come back and best your accomplishments when you’ve completed every puzzle. Only the last three worlds; Helios, Nano and Orbit (the latter of which must be unlocked) will require more than a few attempts per level, and this sudden rise in difficulty lends a feeling of being thrown out the frying pan and into the fire – again, much of this is due to the camera, which on the more elaborate multi-tiered sections often forces you to resort to a trial and error approach.

Just as Sonic’s speed originated from Sega’s desire to showcase the visual prowess of the Genesis/Megadrive, Mercury’s silver blob was indeed a graphical spectacle when the game was originally released for the PSP. The sequel Mercury Meltdown used a cel-shading filter for an animated aesthetic, but the more realistic visuals found in Archer Maclean’s Mercury’s s were definitely the way to go. From the convincing photographic backgrounds and thematic level transitions to the numerous ways in which the mercury itself splits, scatters and rejoins, even after four years this is still one of the best looking PSP games on the market. Only the psychedelic menus work against an otherwise visually sumptuous experience.

As anyone who toyed with one of those deadly puzzles as a child will appreciate, Mercury is an incredibly frustrating game – though I mean that in a positive way. The majority of the puzzles are elementary – or at least they are after several initial failed attempts – but manoeuvring through each complex of traps and pitfalls requires such a delicate touch that you’ll often fall from the map inches from the finishing point… only to re-attempt the level immediately, positive that this time you’ll prove successful. You’ll hate Mercury, hurl expletives at it and threaten to smash your PSP against the wall, but you’ll always return.

I’ve recently come across several arguments for and against taking price into account in a game review. The supporters contend that a review should act partly as a buyers’ guide, with value for money being a major factor. The naysayers argue that prices generally decrease with time, and unless reviews are rewritten to accommodate these changes then older works of criticism suddenly cease to be valid. There’s no right or wrong here, of course, but as I am evaluating the PSN-distributed version of Mercury, it seems only fair to take the game’s lower price into consideration.

As one of the PSP’s initial release, Archer Maclean’s Mercury worked excellently as a tech demo, demonstrating what the system was capable of, but as a full-priced release its relatively short length and that accursed camera became major concerns. However, had the digital distribution market been as widespread as it is today, Mercury would have made a great addition to any online shop. This game has definitely found its home on PSN and would be a worthwhile addition to that PSP Go you’re currently kidding yourself you won’t buy.