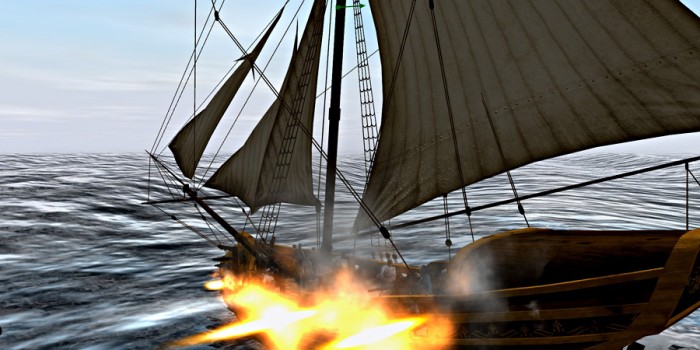 This naval strategy game offers an interesting blend of trading, diplomacy and real-time battles that will satisfy aficionados of its historical setting, though it might prove too single-minded for most.

East India Company, the latest strategy game from Finnish developers Nitro and publisher Paradox Interactive, is an odd concoction of global trading and real-time battles split between several modes of gameplay. Its dubious 17th and 18th Century setting, which witnessed some of Europe’s vilest behaviour, is brushed over (and probably for the best) in favour of a more flexible but less personal strategy perspective.

In East India Company players aspire to the role of Governor Director of the East Indies, orchestrating one of eight playable nations and slowing conquering South Asia and the Indian continent. Despite being relatively complicated and thoroughly expansive, the game is surprisingly accessible, with intuitive interfaces throughout, and menus that are as historically informative as they are helpful. But while EIC is a strategy game that won’t intimidate inexperienced gamers, there’s a number of baffling design decisions that stop it from being quite as engaging as it should be. EIC’s three separate modes, or “levels” – though in all fairness two are essentially variations on the one – are introduced separately in the three-stage tutorial. The Strategic Level and Port View combine to offer you a global map of your ports, possessions, allies and enemies on a malleable time scale, as well as the opportunity to trade and replenish supplies via a port’s shipyards, docks and warehouses. Should your crew encounter hostile fleets while performing the former, you enter the Tactical Level, commandeering your fleets against cargo-thieving no-gooders in real-time.

The game’s objectives are relatively loose, and the Primary and Secondary goals are fulfilled by acquiring a minimum quota in rare materials such as diamonds, furs and tea by a certain date. In fact, one of the most entertaining aspects of the game is the value some of these items had circa 18thC, with spices that are today commonplace being as valuable as precious metals. How you go about meeting the necessary trade quotas is entirely up to you, and given the xenophobic tension that once ran through these nation, an indirect (or “underhand”) approach is often the order of the day. Buy low, sell high is the nature of the game, but nations can be exploited through other methods; for example, some allies will launch an attack on a common competitor in exchange for the commodities they most desperately require. The Port View section allows you to fill your holds with cargo and hire new men. But here the process of loading ships gets extremely tedious, as you are only able to move small portions of cargo at a time… which in the most extreme cases means you’ll be dragging and dropping the same commodity dozens of times. And given the frequency of attacks on the open sea, you’re quite likely to lose the goods anyway. It’s irritants such as this that on their own would be trivial, but added together work against the overall user-friendliness that Nitro have clearly been aiming for.

You are only allowed to (or indeed would only want to) play the Tactical Level on its own. This mode is by far the most interesting aspect of EIC, itself a combination of several genre approaches: the default RTS mode, which plays as you might expect, and Direct Command mode, wherein you manually assume the helm of one ship, utilising both a compass map and the rather nifty Battlecam to fire at your opponents with an adaptively that the generally clumsy AI simply cannot provide. The Battlecam is a particularly commendable addition, allowing you to witness your adversary’s destruction from an up close and personal perspective.

While there are a number of tactical options and manoeuvres, from line formations and sail configurations to the style of cannons fired, the Tactical Level’s brand of naval warfare can be painfully slow, and is rarely as exciting as it should be. There’s the option to adjust the battle realism between Normal, Arcade and Simulation settings, but each skirmish can still take up to and beyond twenty minutes. When your nation has made itself numerous enemies and has up to twenty fleets navigating pirate-infested waters, this can drag the game’s pace to a standstill. You can opt to auto-revolve these conflicts, but at the expense of experience points and loot. This basically means that if you’ve any desire to see your fleets evolve you’ll have to leap from the game’s trading element to these gritty skirmishes with such regularity that it’s difficult to appreciate the Strategic Level’s bigger picture. The ships themselves, from the frigates and brigs to sloops and cutters, are nicely rendered, with detailed men struggling to do their duties against raging waters and enemy fire. The water and weather effects are effective, but as with any game set in the middle of the ocean there’s not an awful lot of visual diversity. While the dynamic weather effects are great, too often they obscure the action. On numerous occasions I found myself staring at a pitch-black screen for what felt like an hour, as the real-time battles were interrupted by nightfall – again, EIC suffers from these well-intended but gameplay hindering design choices.

Having previewed two separate builds of East India Company, I went into the final release copy of this game expecting much more content than I’d previously experienced. Alas, there wasn’t much. The problem with EIC’s open-ended approach to domination is that the game’s trade objectives aren’t really enough to sustain interest beyond a few days of play. There are eight nations to choose from, but the objectives tend to remain the same regardless of which nation you pick, and the freebooter-orientated expansion pack The Pirate Bay, which was released as DLC at the same time as this package, really should have been part of the full game. I also originally described EIC as a “more realistic take on Sid Meier’s Pirates,” but by that I might have subconsciously meant “less fun.”

To this particular reviewer’s tastes, East India Company is a game that’s easy to admire but difficult to love. While the trio of modes fail to merge into a cohesive experience, the game still impresses with the abundance of historical titbits found in the game’s many menus, and the impressively detailed vessels. While EIC doesn’t offer the same scope as found in Pirates of the Burning Sea or Empire Total War, it should nevertheless appeal to historical strategy enthusiasts and/or those with an interest in this era of pioneering and exploitation.