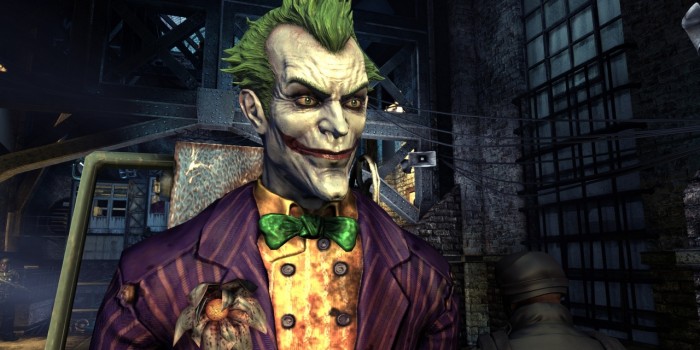 Simply put, Batman Arkham Asylum is the best superhero videogame ever made.

Why are so many comic book videogames substandard? As a staunch comic geek first and a videogame enthusiast a very close second, I often find it baffling that so little effort is put into superhero or comic-based games. Part of this is perhaps down to the fact that few “comic book games” are actually based on the comics themselves; generally they are churned out to correspond with Hollywood movie adaptations instead, and with few exceptions are rushed and uninspired attempts. But even better efforts such as Marvel Ultimate Alliance are admittedly bog standard genre titles that get by on their use of colourful licensed characters and elaborate mythologies. Batman: Arkham Asylum is a different kind of comic book game, for several distinct reasons. Firstly, developer Rocksteady Studios have essentially attempted to set Batman in a Gotham recognisable from the comics, but have not allowed slavish faithfulness to the source material to get in the way of some splendidly inventive visuals. Secondly, rather than take an existing franchise or template and apply the Batman licence to it, Rocksteady have structured Arkham Asylum around Batman’s abilities and methods, with the gameplay varying to fill the Dark Knight’s fighting, climbing and sleuthing boots. Thirdly, rather than simply throw together a set of level-by-level confrontations with Batman’s rogues gallery, the London developers have produced one of the finest screen outings for the Caped Crusader ever; and given the quality of Christopher Nolan’s recent movie offering, that’s no mean feat.

Much of this is down to Batman: The Animated Series writer and comic veteran Paul Dini’s excellent script, which sees Batman navigating the titular madhouse following a coup by the Joker. The plot may be uncomplicated fluff, but it effectively allows players to explore Arkahm and its inmates with an intimacy that no previous Batman game has come close to. Dini’s dialogue is delivered by, amongst others, Kevin Conroy, Mark Hamill, and Arleen Sorkin, who all worked on the significant 90s animated series. Kevin Conroy has always made Batman’s brusqueness sound so natural, while Mark Hamill’s Joker is simply put the best depiction of the character, period. Simultaneously menacing, deranged and hilariously bonkers, the Joker dominates every minute of Arkham Asylum, taunting Batman from CCTV monitors and announcing all manner of madness via the complex’s tannoy. Batman: Arkham Asylum is no slouch when it comes to the core gameplay either, which incorporates several contrasting third-person adventure game elements to effectively place players behind the cowl. Each component works almost perfectly, from the simplistic but thoroughly satisfying physical combat to stealth arenas which require Batman to remove deadly armed prisoners one at a time undetected. While Batman’s arsenal incorporates such staples as batarangs and the grappling hook – many of which can be upgraded through earning experience points – certain scenes require the use of less destructive gadgets to embark on some well implemented sleuthing, including fingerprint scanning devices that put he guys from CSI to shame. The Dark Knight’s detective skills have often been overlooked in favour of his physical proficiency, and it’s refreshing to see Rocksteady place a heavy emphasis on this during the game’s slower and more cerebral moments. Detective Mode, an optical guidance system similar to the radar vision in The Dark Knight, is extremely useful, highlighting essential objects and monitoring how many hostiles and hostages are in any one room.

Along with the usual supporting cast (Commissioner Gordon, Oracle) and villains (Harley Quinn, Bane, killer Croc, Poison Ivy, Victor Zsasz, Scarecrow) Arkham is a character its own right. The updated Gothic structures, replete with gargoyles from which to swing and high-tech security systems, are overflowing with nods to obscure comic villains – from the cell of C-lister Calendar Man to newspaper cuttings of Prometheus, Arkahm’s interiors and exteriors are so brilliantly realised and totally immersive that they are arguably the star of the game. The story mode should take around 10-12 hours to complete, but it’s the great selection of additional challenges and the nigh-on genius Riddler puzzles that truly make Arkham Asylum an astounding package. Edward Nigma has littered conundrums throughout the madhouse for Bats to fulfil, ranging from hidden pick-ups and question marks that can only be seen via the detective mode to memorabilia of almost every major Gotham scoundrel. Taking snapshots of Penguin’s umbrellas, Catwoman’s goggles or the Scarface puppet unlocks profiles of each character. Upon completing the game, you are now able to roam the now deserted Arkham grounds in search of any remaining riddles, which depending on how meticulous you were the first time through may add a good 2-4 hours onto the main game.

Solving Nigma’s riddles also unlocks challenge maps; these fall into either combat or stealth levels, feature an online ranking board and become increasingly demanding. They also highlight how deep Arkahm Asylum’s gameplay is, with the freeflow combat incorporating a level of lateral thinking that wouldn’t feel out of place in a puzzle game, as knife or stun-rod wielding enemies require a specialised method to overcome. The PS3 edition also contains the exclusive option to play these maps as the Joker; more than just a model swap, Joker’s animation and fighting techniques are far removed from Batman’s more meditative approach, and he’s a well implemented bonus if not entirely crucial. Rocksteady will also be releasing several DLC challenge packs for free, which is a prospect that even the most cynical gamer couldn’t grumble at. You only have to glimpse at a few random screenshots to appreciate how good Arkahm Asylum’s Unreal 3 engine graphics are. But what is most remarkable is the effort that has gone into the tiniest of flourishes. Batman’s costume degrades throughout the game, and by the end of this night of hell he’s stubbly, bruised, battered, sliced and hauling the torn remnants of a cape. As previously mentioned, the character designs are inspired, with Harleen Quinzel’s fetish apparel and Scarecrow’s hypodermic gauntlet offering a vision that is recognisable from the source material but distinguishable enough to stand on its own. And it’s not just Hamill and Conroy who put on a fine show; the audio is excellent throughout, from the eerie Gothic score to the intriguing interview tapes that you’ll find throughout the hospital.

If there’s one small area in which Arkham feels insufficient it’s the lack of villains. While the boss fights contained are all memorable, the decision to include only a handful of Batman’s greatest enemies feels like a lost opportunity. But if this allows Rocksteady a considerable roster of unspent psychos for a possible sequel then that’s entirely understandable.

More than any other superhero, Batman has captured the imagination of filmmakers, artists and visionaries, so it should come as no surprise that the Dark Knight and his rogues gallery have become the first comic book property to get a videogame that is not only a superlative use of the license but a genuinely rich experience in its own right. Rocksteady have crafted an unforgettable adventure which can stand proudly beside such fully-realised, narrative-driven experiences as Bioshock, Mass Effect and Metal Gear Solid 4.