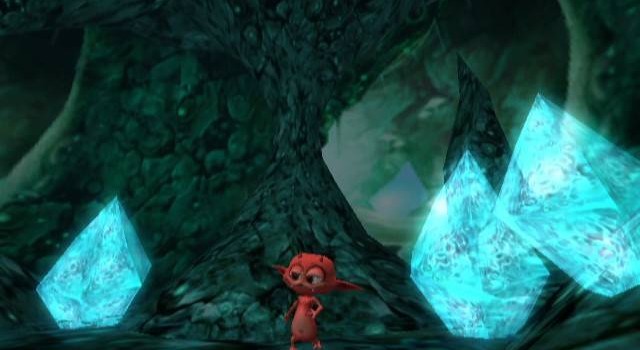 An inexpensive but challenging little platformer that conjures the punishing gameplay of yesteryear.

Cutesy bug-eyed devil Cocoto has popped up in numerous low budget titles over the last few years, and his move to WiiWare has hardly set internet forums alight with anticipation. But despite the generic title, Cocoto Platform Jumper has benefited tremendously from the transition from PS2 bargain bins to a reasonably priced download. It’s not a particularly long game, but it is a reasonably difficult one, and is an affable enough experience that younger or casual gamers – like it or not, that’s the Wii’s primary demographic – will get a good deal for their 700 points.

Following on from Neko’s previous WiiWare entry, Cocoto Fishing Master, Cocoto Platform Jumper is reminiscent of old Taito arcade platformers such as Rainbow Islands and New Zealand Story, in that it offers straightforward gameplay mechanics and a singular level objective. But like those titles, Platform Jumper’s uncomplicated design doesn’t mean it’s by any means an easy game. Despite the 3D graphics players guide Cocoto along a 2D plane; fundamentally it plays like the old Commodore 64 classic Nebulus (also available on the Virtual Console) with your sole goal being to reach the top of each spiralling level. But Cocoto has a trick up his sleeve, in his ability to fire arches of lava. Though these walkways collapse if jumped upon, he can walk along them, producing new bridges to higher platforms. Though this concept is itself borrowed from Rainbow Islands, it actually helps distance the gameplay from the usual Mario ascendants, and provides for some interesting situations. Be prepared to fall, and fall again, screaming profanities and furiously flailing your wiimote. Enemies do not respawn, making subsequent climbs easier, but adding urgency to your ascent is a time limit; when this is exhausted the level’s lava/water/swamp/chocolate custard will begin to rise. Okay, I made that last one up. The lack of respawns does clash somewhat with the game’s health system, which works similarly to Sonic the Hedgehog’s rings but with apples, with felled creatures leaving an apple behind – if Cocoto has at least one apple in his possession he can endure another hit.  The problem occurs when most of a level’s enemies are gone, and without weaker enemies to collect apples from you find yourself scaling several floors only to be killed by a projectile inches from the top.

Each of the five worlds (Abyss, Volcano, Atlantis, Jungle, Heaven) comprises of six standard levels with a bonus round and boss fight at the end of each. The bosses are the highlight of the game, with the likes of three-headed dog Cerber and Poseidon/Zeus amalgam Zaron presenting a considerable challenge. Quite why Cocoto feels the need to take on the God of Lightning is another matter altogether. The virtual instruction booklet that comes with Platform Jumper tells us that he hails from a land known as Abyss, where he and his lil’ devil buddies protect the secret of the magma, an element of power contained within a mystical cauldron. Evil Zaron, obviously desiring this power as any respectable villain might, has captured Cocoto’s friends in an effort to lure him away from the cauldron. Oddly enough, none of this is mentioned within the game, instead capsulated into a seven-second intro sequence. Obviously a game such as this isn’t exactly narrative-driven, but a few more story sequences or illustrated text screens between levels would have provided players more of a reason to reach that final boss.

Should you feel the need to play Platform Jumper against friends, there are two offline competitive modes. Battle is a rather basic one-on-one take on Super Smash Bros., while the Race mode is a more enjoyable four player romp, with Cocoto and pals competing to reach the top of a particular level first. Neither of these is particularly substantial, but they may provide a few hours of fun. Taking into account that it’s a four year-old PS2 game, Platform Jumper looks fine in its WiiWare form, with colourful environments and enemies complimented by a chirpily eerie soundtrack that occasionally evokes Tim Burton’s movies. The translation from Dual Shock to Wiimote is also a pretty good one, though the motion controls are kept to a minimum, with a shake of the remote enabling a spinning melee attack. Movement is handled via the Nunchuk, with buttons B and Z handling Cocoto’s pitchfork hurling and lava arches respectively. The only real niggle I had with the controls is Cocoto’s limited jump abilities; while he is able to perform a double jump, he still isn’t able to jump particularly high. Given the level of precision required to make it to the top of the later levels, the ability to briefly hover or glide (though there are rare power-ups for this) might improve the experience for younger gamers.

This jumping issue drives the primary concern I have for Cocoto Platform Jumper; quite who is the game aimed at? Even on the easiest difficulty the game presents a challenge that many novice gamers will be flustered long before the merciless later levels. Equally, anyone skilled enough to even attempt the hard setting (or old enough to remember Rainbow Islands) will likely be put off by Cocoto’s sugary stylings – and more importantly, the question of why the little devil can effortlessly discharge fire and molten rock from his flesh but is vulnerable to flaming platforms and rising lava.

One of the Wii’s most concerning software trends has been the abundance of shovelware that hits the console every single week. My biggest qualm with oft-condemned Wii titles such as Jenga and lazy ports like Ninja Breadman is that, broken play mechanics aside, they don’t offer enough to warrant a full retail price tag.

By moving Cocoto Platform Jumper to the Wiiware shop, French developer Neko Entertainment has turned an underwhelming PS2/Gamecube title from 2004 into a fun little downloadable game. The key here is the price, and at a mere 700 points, cheaper than the Virtual Console’s N64 or SNES games, Platform Jumper’s lack of variety can easily be overlooked. Take into account the game’s intuitive controls and taxing level design and you have a platformer that harks back to an era of near-impossible jumps and overwhelming enemies. Shame about that title, though.