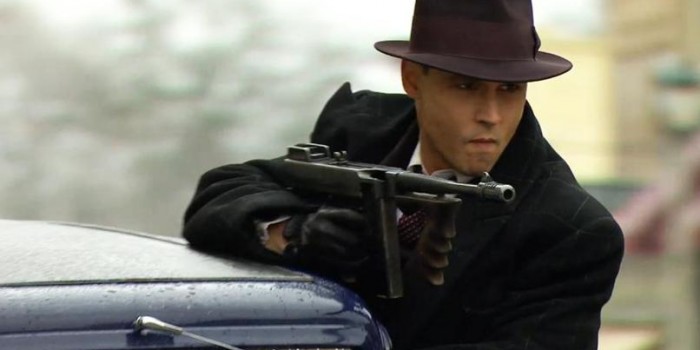 An empty, apathetic movie that makes the mistake of treating the notorious gangster like a misunderstood rock star.

William Hanna and Joseph Barbera’s eternally feuding cat and mouse were driven by the purest of designs. Tom to kill Jerry, Jerry to rid his environment of his predator. As a cartoon this simplicity works; immediately, instinctively we know the score and who to root for. With Public Enemies Michael Mann adopts a similar approach to cops versus robbers. Earnest FBI agent Melvin Purvis (Christian Bale) is driven to catch publicly idolised bank robber John Dillinger because, um, he is. Equally, the coolly sociopathic Dillinger (Johnny Depp) robs banks because he’s a villain, and he’s enjoying himself far too much to give it up. Of course, Dillinger is played by Johnny Depp, so it goes without saying he’s no common-or-garden thug but a charismatic and likeable ladies’ man, viewed by the Depression era American public as a Robin Hood figure. Despite being instrumental in the death of numerous police officers and several security guards, Dillinger and his romance with a coat check girl are at the centre of the movie.

Still, at the forefront of this slickly vapid game of cat and mouse, Depp still manages to shine. As does the enthralling Marion Cotillard (La Vie en Rose) as love interest Billie Frechette, a fragile, worthless creature who wishes those nasty coppers would just leave her Johnny be. The ever passionate Christian Bale, however, is underused to the point that one wonders if Purvis was written into the movie just to endorse an accompanying poster to Depp’s. A pre-credits snippet informs us that Purvis committed suicide in the early sixties, but the film offers no clue as to why.

Public Enemies is essentially a remake of Heat, which was a restructured L.A. Confidential. Here Mann’s commitment to this central cop/robber theme is worn rather thin. Filmmakers such as Woody Allen and David Lynch may return to familiar themes over and over again, but always find something new to say, but Public Enemies struggles to slip from the shadow of the superior Heat. Whereas De Niro’s bandit in that movie was an intense perfectionist who kept casualties to a minimum, John Dillinger gets by on cocksure nonchalance, repeating the same bank job time and again as the FBI slowly move in. Though I didn’t find it as distracting as some, there’s no denying that Mann’s unwavering stance on digital film often clashes with Public Enemies’ 1930s setting. At times his direction is so deliberately coarse that it feels like unfinished footage found on the cutting room floor; during a midnight shootout, amorphous silhouettes stumble through dense woodland as gunshots have all the oomph of popped corks.

Despite Mann’s frenetic camera work, Public Enemies suffers from a lack of historical relevance. We hear that the public views Dillinger as an antihero, but the film neglects to fully render the sense of despondency with the American government that was rising throughout Depression era Chicago and beyond. The result is a film that exhibits excellent lead performances and an engrossing score by Elliot Goldenthal, but feels purposeless and incomplete.