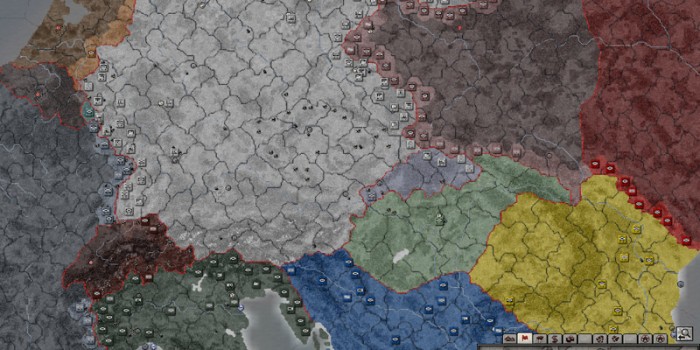 The latest instalment in this grand strategy series will please wargame enthusiasts… but alienate pretty much everyone else.

Certain games are practically designed to showcase their intended platforms. Gears of War, Crysis and Assassin’s Creed are just a few titles that are simply begging to be played before an audience – the sort of audience who might appreciate a Locust head-shot or Creed’s crowd mechanics, that is. Hearts of Iron III, the latest iteration in the enduring grand strategy series, is the exact opposite, and to the casual eye might appear to be a simple map and several hundred menus. Actually, that’s precisely what it is; though the Hearts of Iron fanbase would likely be offended if you expected anything more.

Yup, this is a grand strategy game, with an emphasis on the grand. Hearts of Iron III is on a scale which makes Command & Conquer or Dawn of War look positively piddly in comparison. It’s also a game that will probably divide those who play it, proving either deep and involving or utterly impenetrable depending on your tastes. Though to be fair, the latter party presumably won’t be drawn to Hearts of Iron in the first place. Like Paradox’s similarly meditative Europa Universalis series, Hearts of Iron is about as hardcore as it gets; the tutorial mode offers you “guidance from an expert”, and Paradox make no effort to win your affection with fancy cinematics or speech samples. In terms of scope, however, the game is genuinely jaw-dropping, allowing you to play as the historical leader of one of over 100 nations from between 1936 and 1948. While elaborating on the gameplay mechanics on even the most basic level would be a waste of time – even the oxymoronic Quick Start Guide pdf supplied with the game is seven dense pages of text long – the game’s emphasis on historical accuracy is evident from the authentic political party members you’ll employ to the understanding that deviating too far from original events isn’t always as beneficial as it is fun. One visual inconsistency that is somewhat questionable is the substitution of the Nazi Swastika with the flag of the German Weimar Republic; this level of censorship seriously undermines the game’s authenticity.

Arguably, Hearts of Iron III is as intricate as you make it. Build your armed forces, raise your nation’s production and manipulate diplomatic ties while enhancing your own politics, and employ devious tactics such as depriving your rivals of their troop supplies or natural resources… or just partake in one of these megalomanic activities if not all take your fancy. A wealth of customisation options allow you to set your own win conditions, including when your nation becomes involved in the war. It’s also possible to let the AI control any of the elements of the game that you do not wish to; this provides a good way to familiarise yourself with specific sections of the vast interface before expanding into others. As good as this level of choice is, you can have too much of a good thing, and unless there’s one particular aspect of World War II micromanagement that intrigues you, you might wonder where to start. Fortunately, for those bewildered by the options on offer, the quick start menu offers four campaigns: Germany 1939, Soviet Union 1941, USA 1936 and Japan 1941. We wonky-toothed limeys apparently aren’t significant enough; though the custom campaign does suggest you pick an “interesting choice” from the aforementioned four nations and also the United Kingdom, Italy or France.

The detailed 3D map is as conventionally attractive as it needs to be, with detailed but static models of your fleets and forces; but perhaps the biggest change to HOI is the expansion of provinces from the second instalment’s 2,600 to around 14,000. The soundtrack is surprisingly affecting, though the use Wagner’s ‘Ride of the Valkyries’ does become overbearing after a while. Despite the rudimentary visuals, however, the game currently suffers from comparatively long loading times and frequent slow-down, particularly when playing at the fastest possible speed. My formidable rig froze permanently several times and the game had to be restarted, though this was alleviated to an extent after I’d downloaded the most recent patch. But HOI3’s greatest shortcoming has to be its insufficient tutorial. Guided by a thinly veiled, shoddily translated Adolf Hitler, it’s so disappointingly implemented that anyone new to this style of wargame will enter the experience feeling clueless and uninformed. While this may speak volumes about Paradox’s refusal to dilute this impenetrable series, it’s difficult to imagine anyone jumping into grand strategy wargaming through Hearts of Iron III.

Subjectivity must come into a review at some point – what is a review other than an opinion? – and I think it’s safe to say that Hearts of Iron III isn’t for me. Paradox have made some effort to make the latest in this venerable series as comprehensible as possible, but the inadequate tutorial, frequent slow-down and open-ended nature of the game aren’t likely to win over anyone new to the niche genre that is grand strategy.

But it’s difficult not to respect Hearts of Iron III on many levels. It’s a smart game, with impressive AI and a reasonably logical interface, though the never-ending number of configuration and micromanagement options at your disposal is as overwhelming as it is impressive. But then Paradox know who Hearts of Iron III is for, and haven’t attempted to dumb down or overly polish what was already an effective formula for the likes of me. And why should they?