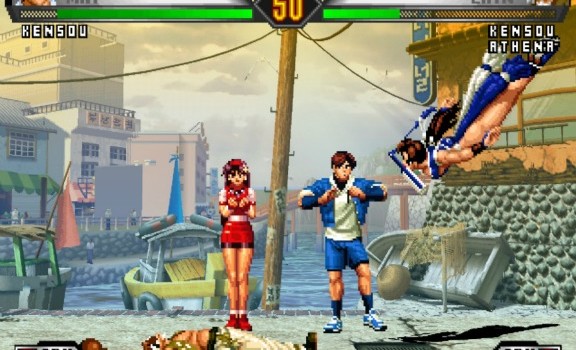 Look beyond this game’s ugly visuals and you’ll find its fighting spirit is still strong after ten years.

Back in 1998, superhuman pugilism was a far more pixelated affair. Punch-ups would require that opponents face each other along a straight line, while parallax scrolling was a positively jaw-dropping spectacle. Back then there was also no downloadable content to compete with the joys of dispensing endless rows of coins into shiny arcade cabinets in the name of fun and frustration. From this nostalgia-marinated era The King of Fighters ‘98 Ultimate Match hails, a slight update on the original 2D fighter that in its day was the hardcore gamer’s choice. With a then unprecedented character roster and some complicated mechanics, the game still plays well today, though this iteration on the Xbox 360’s Live Arcade bears the brunt of a rushed and lackadaisical port.

The first thing that will strike you about KOF ’98, whether or not you’ve played it before, is how poorly the game’s graphics have aged. KOF ‘98’s sprites have not stood the test of time, and look far more dated than those from Capcom’s rival series of the time, Street Fighter Alpha. That is not to say that the game is not without its charm, and the combatants themselves are an eclectic and colourful bunch sporting distinct designs. More importantly, despite the dated presentation and half-hearted translation work, KOF ‘98’s core gameplay still stands up. With around fifty different characters to choose from, there’s as much depth here as in any of Capcom’s more recognised fighting titles. From punk masochist Iori Yagami to immortal schoolgirl Athena Asamiya, Ultimate Match has a personality, team and playing style to suit every kind of player. The original KOF ’98 was a ‘Dream Match’ entry in the series, permitting SNK to include characters that were killed or quit in previous instalments. The Ultimate Match edition takes this even further, with every fighter to have appeared in KOFs ’94-97 now available. Fan favourite Eiji Kisaragi makes a welcome return – though his popularity can be credited to the fact that he’s a cool looking ninja as opposed to a top tier pick. As do Kasumi Todoh and the boss team from KOF ’96 (Fatal Fury bosses Geese Howard and Wolfgang Krauser, joined by Art of Fighting’s Mr. Big) as well as über-bosses Goenitz, Orochi and Rugal. There are also alternate versions of numerous characters from their previous titles such as Real Bout Fatal Fury and the earlier KOFs.

As well as the Arcade (team of three) and Single Play modes, there’s also Practice, Endless (survival) and Challenge. The latter is extremely useful, providing an introduction to the game’s more complicated mechanics while offering veterans a series of clear-cut trials. Also included is the Neo Geo original; it’ll only appeal to those adverse to new characters, backgrounds and features, but is a welcome addition nevertheless. The Online play mode, perhaps the most noteworthy addition for die-hard enthusiasts, only occasionally suffers from lag but is ruined by the lack of a penalty for quitting matches. Beating an opponent’s health down to ten-percent only for them to disconnect as you commence your concluding strike is quit possibly the most maddening thing you’ll ever experience. Ultimate Match also brings a new command mode into play. Whereas the Advanced and Extra settings tailored the specifics behind evasive manoeuvres as well as how the power gauge fills, Ultimate mode allows players to customise and interchange these settings to match their style of play. Not unlike Street Fighter Alpha’s Visms, Ultimate will probably appeal only to KOF veterans, but it’s a thoughtful inclusion – or at least it would be were the options not in Japanese.

This brings me to the translation work that graces several of Ultimate Match’s options and victory screens; or more specifically, the lack of it. A quick glance at the game’s instructions should be enough to comprehend the Ultimate options, and understanding the Japanese finishing quotes is hardly vital to appreciating the game, but in this oversaturated and competitive market such lazy porting is unpardonable. Add to this the absence of any visual enhancements – bar a ‘soft’ effect, which is comparable to playing the game while squinting – and you have a title that with a little more effort could have been not only utterly recommendable, but arguably the second-best fighting game on the 360. The KOF series’ 4-button control scheme lends itself better to control pads than Capcom’s usual 6-buttons, though pulling of many of the super moves never comes as effortlessly as it does in Street Fighter IV. Even playing via a MadCatz FightStick, this game feels stiff in comparison to anything produced in the decade since. Boy, have us contemporary gamers been spoilt.

Had Ultimate Match game been released earlier on Live Arcade, these numerous issues may not have been as noticeable. But with the solid Street Fighter IV currently flaunting its highly stylised visuals and balanced multiplayer Championship mode, KOF ‘98 pales in compassion. Further still, there have been 6 KOF titles since this one, with the The King of Fighters 2002 Unlimited Match offering a corresponding dream match only with even more characters and marginally better visuals and mechanics.

King of Fighters fans and SNK devotees will have already bought this game by the time I finish writing this, so the perhaps the question should be “does everyone else need this game?” For 800 Microsoft Points, it’s a reasonable package, with (mostly) balanced characters and enough modes to potentially keep you entertained for months… until the beautifully hi-res King of Fighters XII makes it to these shores later this year.

For those who want an SNK primer to practise for that game’s release, KOF ’98 does its job; though the superior Garou: Mark of the Wolves, which debuted on Live Arcade a week prior, would be a better bet. Despite having only been released a year later in 1999, it has a denser but more balanced roster, livelier sprites and smoother controls.