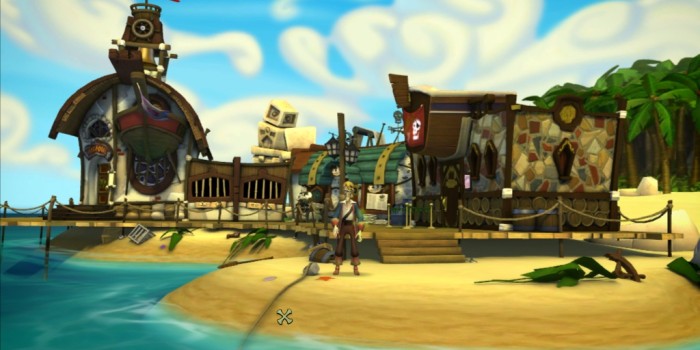 Guybrush Threepwood’s return maintains the series’ trademark humour and charm, but ‘Launch of the Screaming Narwhal’ feels like more like a teaser than an episode in its own right.

Ineffectual pirate Guybrush Threepwood is back after almost nine long years, and while a new instalment in the Monkey Island series is unlikely to stir up a fan-storm à la The Phantom Menace, there are few other videogame series that conjure such fond memories amongst nostalgic gamers. With the placid Swashbuckler once again sailing the seas, the foremost question followers will be asking is whether or not Chapter 1 in Tales of Monkey Island has retained the wit and whimsy of its predecessors. The answer is a resounding yes, and though ‘Launch of the Screaming Narwhal’ suffers from some puzzle issues and an abrupt cliff-hanger ending, as the first instalment in a five-part series it’s offers a fun few hours and sets up a larger, ongoing plot as well as could be expected.

LucasArts may have abandoned the Monkey Island franchise for the bigger bucks that Star Wars titles generate, but there really couldn’t be a developer more suited to taking on this sequel than Telltale Games. The authority in episodic adventure gaming is not only comprised of several ex-LucasArts employees, but has been channelling the spirit of the point ‘n’ click heyday with games based on properties such as Wallace & Gromit, the guys from homestarrunner.com, and a successor to another LucasArts classic: Sam & Max. Rather than following on directly from fourth instalment Escape from Monkey Island, Tales of… takes place after a fictional fifth game. The zombie pirate Le Chuck is back (it doesn’t matter how, he just is) and this chapter opens with a maritime skirmish for Guybrush’s feisty wife Elaine. Guybrush has acquired a mystical sword with which to vanquish his undead nemesis, but his efforts to permanently rid the world of Le Chuck result in something expectedly unexpected; Le Chuck is brought back to the realm of the living and Threepwood shipwrecked on Flotsam Island with a possessed zombie hand that isn’t too fond of its attached owner. Anyone familiar with Bruce Campbell’s self-inflicted shenanigans in Evil Dead II will appreciate the direction this goes in, with Guybrush being slapped by his possessed palm at regular intervals.

The majority of ‘Launch of the Screaming Narwhal’ takes place on Flotsam Island, where the surrounding winds blow inward 24 hours a day, the reefs are sharper than a dragon’s tooth, and escape is impossible. Naturally, this isn’t going to perturb the optimistic Guybrush from acquiring the vessel of the title, and ruining life for the residents of Flotsam; who have also been washed ashore and constructed a town from any salvageable flotsam and jetsam they could find. To complicate things further, Guybrush discovers that he has been infected with the Pox of LeChuck, a green-tinted cloud that is spreading across the Caribbean and zombifying the locals.

Flotsam’s isolated setting does pose several problems in continuing the universe created by Ron Gilbert, Tim Schafer and Dave Grossman, in that that it allows little opportunity for familiar faces. Voodoo Lady – who, as a recurring joke, relocates her home to wherever Guybrush ends up – and Chuck the Plant make an appearance, but others such as Wally, Smilin’ Stan (though he’s mentioned) or Murray the Talking Skull have yet to turn up… though I’m sure they will. The new characters are pretty good though, such as Joaquin D’Oro; a pirate who has given up his pursuit of booty in order to seek the rarest of action figurines, Guybrush’s staunch new first mate Winslow and the Marquis De Singe; a demented French exile whose remedy for Guybrush’s pox is to amputate his hand. It’s this encounter with De Singe that is by far the highlight of the chapter, with Guybrush strapped to a revolving operating table, fumbling for a way to escape while the maniac Gaul sharpens his tools. Some of the other set pieces aren’t quite as entertaining, with several jungle maze puzzles feeling as though they were created to stretch out the game’s three hour length. But on a whole the puzzles are up to Telltale’s usual standard; you’ll initially be baffled by the obscurity of them only to later wonder why you hadn’t thought of the solution sooner. The series’ trademark multiple choice retorts are a bit disappointing though, as they generally provide the same response whichever one you choose.

Tales is the second Monkey Island game to feature 3D graphics, and while LucasArt’s first effort failed to capture the series’ spirit, things have obviously moved on in the last decade, and Telltale have irrefutably captured the spirit of the first three game’s 2D sprites. Guybrush’s facial expressions and versatile eye animations add a further dimension to the humorous dialogue, while the assured art direction and vibrant locales are complimented by Michael Lands’ indispensable theme. Sadly, such positive things can’t be said of Tales of Monkey Island’s control scheme, with the keyboard/mouse setup proving frequently awkward. Whereas Wallace and Gromit’s Grand Adventures had been designed with the Xbox Live Arcade in mind, Tales’ controls have been tailored to accommodate the Wii’s remote – the game makes its way to WiiWare later this summer. It’s a shame that there’s no option for the traditional, solely mouse-driven point ‘n’ click method, which has remained untouched for so many years because it works.

Tales of Monkey Island can be purchased in its entirety from the Telltale site ($34.95) or Steam (£24.99). Unfortunately, as with the Wallace and Gromit series there’s currently no option to purchase the episodes individually, which I find contradictory to the basic concept of episodic distribution. One small query I have regarding the second chapter is whether or not the inhabitants of Flotsam Island will return in future chapters. While some have criticised the developer’s tendency to recycle character models in each episode, I’ve always felt that much of the charm of these episodic series is found in the recurring characters. Perhaps Chapter 2: ‘The Siege of Spinner Cay’, which sees Guybrush search forLa Esponja Grande, a legendary sea sponge with unparalleled healing properties, will allow travel between islands.

Naturally, the problem with a series so widely treasured as Monkey Island is that it’s likely to come under severe scrutiny from long-term fans, who will perhaps bemoan Tale’s 3D direction, and that the voice work seems a little off (despite employing most of the original talent) but ‘Launch of the Screaming Narwhal’ is as close an interpretation as any modern sequel is likely to get bar a 2D remake… which is out the following week, coincidently.

The dominant issue players are likely to have with ‘Launch of the Screaming Narwhal’ are with Telltale’s handling of the episodic format rather than the game itself. Both of Telltale’s Sam & Max seasons had story arcs that ran through the background of each episode, but each segment still felt like a full (albeit short) adventure in its own right. By aiming for a more ambitious and encompassing narrative, Telltale has produced a first chapter that does indeed feel more like a chapter than a noteworthy experience by its own. But this is not to say that ‘Launch of the Screaming Narwhal’ is not a quality effort in almost every department. The vibrant visuals, likeable protagonist, excellent voice work and overall splendid production values make this possibly the best Telltale series so far – or at least a very good one. If you’re a fan of the Monkey Island series, old LucasArts titles in general or any of Telltale’s other efforts then subscribing to Tales of Monkey Island is a no-brainer.