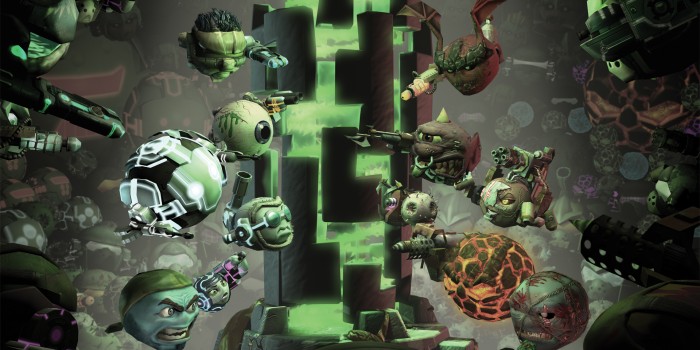 I’m the sort of unabashed man-child who consistency appals fully matured adults with my almost encyclopaedic knowledge of 80s cartoon themes and toy commercial jingles, but I still found myself having to Google ‘Madballs’ for a quick nostalgia nudge. Despite having spawned an animated series and Marvel comic book the bouncy head-ball-things had disappeared into obscurity for almost two decades until recently being resurrected by the skilled sculptors at Art Asylum. And now on Live Arcade comes the video game you never expected to see; Madballs in Babo: Invasion, which sees the Madballs toy line invade freeware top-down shooter BaboViolent 2.

Canadian developer Playbrains’ website claims that the company is committed to delivering “console and PC games that blur the lines between downloadable and retail games”. Well, they’ve definitely managed that with Madballs in Babo, a release that features accessible but addictive gameplay and at 800 MS points has more modes and features than many full priced titles. The single-player campaign features 10 levels which can be played from the perspective of either the B*D*I (good guys, pretty ugly) or the Scorched Militia (bad guys, really ugly). The story, if one was needed, sees the rival Madball factions crash-land onto the planet Babo, inhabited by the similarly proportioned of the same name. The characters you will unlock all have distinctive personalities and abilities (a tap skill and a charge skill) as well as weapons that are exclusive to each faction; these also have two functions each, though the second must be unlocked via experience points.

While the campaign is enjoyable enough, with co-op available, this game is truly a competitive multiplayer experience through and through. There’s a wealth of available modes, from the usual Skirmish, Team Skirmish and Capture the Flag offerings to two unique modes: Invasion and Avatar Attack! The experience you earn unlocks characters, weapons and abilities in every game mode, so you’ll want to return to the campaign if only to ensure that you’re better equipped for your next deathmatch.

As someone who tends to play through a substantial portion of any single-player game before tackling the multiplayer, I found this system worked particularly well. Those wishing to play solely online might find themselves a little handicapped during the first hour-or-so of Madball’s versus modes, though each respawn does grant you a powerful grenade and molotov cocktail regardless of your rank. But hours into Madballs you’ll still be earning access to new characters, moves and weapons; Playbrain are clearly aware that unlocking these secrets is key to the game’s appeal, and a helpful menu shows you what’s on offer, and what you’ll need to do to get it. As you are able to switch between characters and weapons with every respawn, there’s a high level of experimentation involved. Depending on which team you play as you’ll have access to different weapons and ball classes (Heavy, Assault, Support, Flyer and Runner) and deciding on the optimal weapon and approach for each of these is vital to your success. Slow Gatling guns and bazookas are only useful on the more robust balls, for example, as they tend to make the smaller, lighter balls recoil, while the weaker Support units can heal team-mates but should stick to long range armaments.

Currently the most popular mode is the Avatar Attack!, which begins with a hilarious intro in which your Xbox Live avatar is placed into a steel container and “prepared for optimal gameplay” (with various messages such as “minimising limbs” flashing by) before your digital self-image exits in a more disembodied form. While this mode lacks the character-specific abilities, your avatar can now perform leaps, and increases in size with every kill. Bigger heads are able to withstand greater damage, but are far easier targets, and there’s a real egotistical thrill to be had from having the largest noggin in any one match.

Invasion is an equally interesting mode, as it requires each team to build their half of the map before each match, and vote on where to place control points and defensive gun turrets. Regardless of whether you build your own maps or play the presets, the level design is superb throughout, with ramps and springs that use the game’s physics to great effect and force fields and walkways providing all sorts of opportunity for team strategy. Madballs in Babo is also one of the finest looking titles available on Live Arcade. The artistic direction on each level is very good, with the old-school music sounding like something from the Narc era, though BaboViolent 2’s bloody deaths have been removed, with balls now spilling colourful confetti innards when they die. Several nice touches, such as the way your ball adjusts itself to a forward facing position whenever you stop, and memorable character lines (giant eyeball Oculus Orbus screams “ah, my eye!” whenever he croaks) lend the game an amusing but daftly brutal personality. The camera can also be switched to a top-down position, for those used to the original BaboViolent or shooters such as Geometry Wars.

Quite what inspired newbie Playbrains to combine a forgotten toy property with a respected but relatively unknown freeware title – other than the fact that both properties involve disembodied heads – we’re probably better off not knowing. Madballs fans might be disappointed to learn that the characters are hardly utilised. In fact only two of the original Madballs toy line are included in this game; Oculus Orbus and Horn Head. But with or without that licence, Invasion is still an excellent Baboviolent sequel and an impressive effort in its own right.

I had a brilliant time unlocking Madballs in Babo: Invasion’s roster and arsenal, but the question remains as to whether people will continue playing the game once they have seen everything the game has to offer. There’s also the issue of balance; the Scorched Militia seemed to win the majority of matches regardless of who was playing. Avatar Attack! and Invasion currently appear to be the most popular varieties of deathmatch, but many of the other versus modes are practically unpopulated.

And that’s a shame, because Madballs in Babo provides one of the most entertaining fragfests on the Xbox 360. Seasoned gamers will probably opt for Live Arcade contender Battlefield 1943, but if the oversaturated World War II market isn’t your thing then give this bizarre fusion of ideas your time. With accessible but deep gameplay, outstanding map designs and the promise of downloadable content, Madballs in Babo is easily worth the 800 MS points. Few full-priced games manage to cram so many well executed features, and fun, into one neat package.