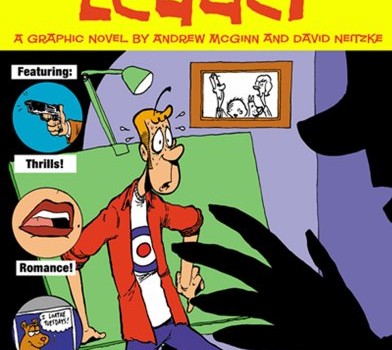 I recently reviewed Andrew McGinn and David Neitzke’s The Legacy, a hilarious graphic novel about a young artist who inherits his father’s beloved newspaper comic strip “Simple Pleasures” and strives to make it the most offensive and reviled cartoon in America in order to get his commitment cancelled.

The Legacy is sharp, genuinely funny and its subject matter is quite unique for the comic medium. I had the opportunity to ask writer Andrew a few questions about his warmly received debut, and his answers are as entertaining as the book itself.

SA: How did the idea for The Legacy come about?

Andrew: Well, funny enough, it started when David and I were rejected by the syndicates for a family friendly newspaper comic strip of our very own. We’ve been friends since our college days in the mid-’90s. A few years ago, we hit on the idea of collaborating on a daily strip that, in our minds, would be so funny, so timely and so hip that it would instantly compel newspapers everywhere to once and for all drop “Blondie” and “Mary Worth” and run ours instead, thereby winning over an entire new, younger generation of newspaper consumers.

We decided to try our hands at a graphic novel instead, and promptly made good use of the freedoms this new medium allowed by dropping as many f-words as possible. I still think “Marmaduke” would be a lot funnier if every so often somebody used some profanity. And so the idea for “The Legacy” was born during one phone call. We’d just spent a good long while trying to be a part of that world (the world of squeaky clean newspaper comics), so why not turn on it? Perhaps the most impressive element of the graphic novel is the impressive fictional comic strip history you and artist David Neitzke have constructed. Would I be safe in assuming that this project spent a long time in gestation?

Actually, it came together rather quickly, especially considering we both have full-time day jobs. It took much longer to find someone to take a chance on two newcomers and actually publish it. We didn’t really have to do much research either. We’re the kings of useless pop-culture information. I can’t speak for Dave (although I think I can here), but I can’t read a tape measure, balance my check book or fix most things around my house, but I can rattle off every Jethro Tull lineup change between 1968 and 1978, and I don’t even really like Jethro Tull. Crap like that. We both love comics and comics history, and so playing in that universe was almost effortless. I’m not bragging, either, because my wife would much rather I be able to fix things around the house. Me too.

Movies about the filmmaking process are relatively common, and practically one in ten novels has a writer for a protagonist. Yet comic books about the comic industry or the creative talent behind it are virtually non-existent. Why do you believe that is?

Hmm. Good question. Maybe it’s because directors, actors and novelists have been so romanticized through the years that we’re all fascinated by what goes on behind the scenes. In the U.S. at least, comics have long been perceived as junk literature and appropriate reading material for kids and retarded adults only, and so maybe we all subconsciously doubt our self-worth as creators. Maybe we think, “Who the hell would want to read about me trying to draw some big tits on this female zombie?” Maybe we’re right.

My biggest influence isn’t actually another writer, but Frank Zappa. I’m taking my cue from him and the way he lampooned rock music and teen life with the Mothers back in the ‘60s. I look at the comics community the way he looked at the “counterculture.” There’s a lot of great material there. Someone just has to have the guts to point out the absurdities. To use a phrase, maybe I’ll never work in this town again.

You’ve stated that you’re not a particularly big fan of comic strips, yet the parodies are so spot-on that is hard to believe. Was a lot of research required, or were strips like Garfield and Peanuts just properties you grew up with?

I’m a newspaper reporter by day (on the all-important arts and entertainment beat), so I get to regularly witness how attached people get to some of these strips. A year or so ago, we briefly stopped running Garfield and people were literally cancelling their subscriptions. Many people subscribe just for the comics. And so I torture myself on a daily basis to see what all the fuss is about. I try to never miss The Family Circus or Beetle Bailey. In our paper, Beetle Bailey is credited to “Mort, Greg and Brian Walker,” and often times I think, “OK, how many Walkers does it take to think of a gag that lame?!”

I also once did a feature story on why old comic strips never die and was able to interview the likes of Bil Keane (Family Circus) and Mort Walker. That turned out to be an invaluable amount of research when it came time to write “The Legacy.” I was able to pick these guys’ brains firsthand. In fact, some of their quotes later showed up as dialogue in “The Legacy.” I must say, though, Bil and Mort and Chris Browne (who took over “Hagar the Horrible” for his dad, Dik) were some of the most gracious people I’ve ever interviewed. Making fun of them in “The Legacy” is a bit like walking up to the cutest little puppy and kicking it in the face.

But also, some of these comic strips are just part of everyday American life. Even if you’ve never read a single Garfield strip, you know he’s a fat, lazy cat who loves lasagna and hates Mondays. Some people might not know Garfield even originated in a newspaper comic strip. He’s been a cartoon character on TV, the subject of a couple of movies and he’s pictured on a whole bunch of products at the supermarket. Same with the Peanuts gang. In fact, I personally never miss the Charlie Brown animated holiday specials. And so making fun of Garfield or Charlie Brown is about as easy as making fun of George Washington or Uncle Sam or Superman or Mickey Mouse. Your base of knowledge can be very limited and you can still know enough about them to parody them.

Parts of The Legacy could be interpreted as a writer venting his frustrations at an industry that refuses to evolve. How difficult was it to get a graphic novel that doesn’t neatly fit into an easily marketable genre published?

Getting “The Legacy” published was much, much harder than actually creating it. In a way, you acknowledged that challenge in your review of the book when you noted the glut of superhero/vampire/zombie comics. There’s not much in the way of humor. Or at least humor this broad. And since this is our first project, our names have no recognition. A double-whammy.

The Coda contained in The Legacy really emphasizes the amount of effort you and David put into the comic’s metafictional elements. How was that section developed in relation to the main story?

Out of necessity! The publisher asked for some extra pages, so that’s what we came up with … sort of a cross between a Christopher Guest mockumentary and what Alan Moore did between the chapters of “Watchmen.“ Turns out, it was actually more fun to write than the story itself. We just really put our love of comics history on display with that section.

So… what’s next for you guys? I read that you’re planning a follow-up to The Legacy – will that take into account the hilarious final page of The Legacy’s coda, which gave us a glimpse into the future?

Actually, our next project (if I can get around to starting it between my day job and raising a 20-month-old toddler) won’t have anything to do with “The Legacy” at all. It will be inspired by our mutual love of Universal’s monster movies of the 1930s and by my recent befriending of an old horror actor who’s now a fixture on the autograph convention circuit. If anyone asks, I tell them to expect a combination of “Tuesdays With Morrie meets Fatal Attraction meets Frankenstein Meets the Wolf-Man.” Sounds like a winning combination to me. Or at least I hope.

For more info on The Legacy visit www.molechpress.com/legacy.html.