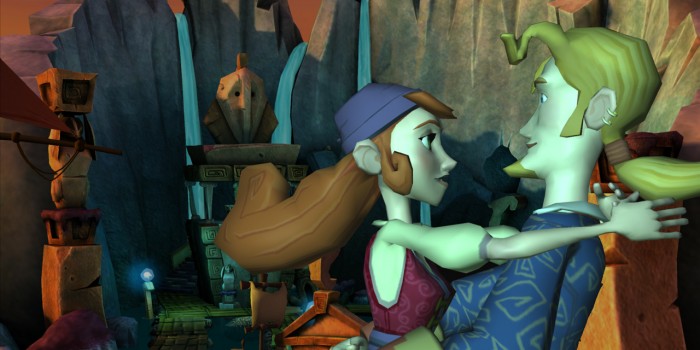 Chapter 2 of Threepwood’s episodic exploits is more expansive and more satisfying than the first, even if it ultimately feels like the second dish in a prolonged five course meal.

When ineffectual pirate Guybrush Threepwood made his long-overdue return in Telltale’s first Monkey Island episode ‘Launch of the Screaming Narwhal,’ it was received with more of a pleasant welcome than the ecstatic reaction adventure gamers might have hoped for. Chapter 1 was an infuriating tease, charming us with its splendid features and dry wit before darting out the door as things were looking serious. Suddenly, a month seemed like a very long time – and that month casually extended into six weeks.

Previous Telltale episodes have essentially been standalone in structure, with each instalment ending in a satisfying enough manner, with a few background stories or a common antagonist to tie the “seasons” together. Tales of Monkey Island has clearly taking a different approach, with the chapters telling a more ambitious continuing narrative. While this will undoubtedly serve the series well when the complete saga has been released, on a monthly basis it’s akin to being forbidden from watching an enthralling movie for more than ten minutes per day. This inherent problem aside, ‘The Siege of Spinner Cay’ is a superior effort in many ways, with more environments and Telltale’s signature “so simple once you’ve solved them” puzzles. As recounted by the all-knowing series staple Voodoo Lady, we previously left Guybrush at the tip of pirate hunter Morgan LeFlay’s sword. Several obtuse actions later, and LeFlay has fled with Guybrush’s zombified hand – now replaced with a surprisingly practical hook – leaving the Screaming Narwhal no option but to set sail for Jerkbait Islands. Here, in search of Voodoo Lady’s ex-squeeze DeCaro and La Esponja Grande, Guybrush encounters the mer-people of Spinner Cay. According to legend this big sponge has the power to soak up the Pox of LeChuck, which is slowly spreading across the Caribbean and turning surly islanders into the (only marginally more) malicious undead.

In true Monkey Island fashion, things are never this straightforward, and Guybrush is soon caught between the amphibian locals and recently-undead pirate Captain McGillicutty, who desires La Esponja Grande himself. To further complicate matters, Elaine has bonded with the now human LeChuck, who is far less evil in the flesh than he was as a disembodied spirit. In facts he’s a pretty decent guy, much to Guybrush’s chagrin, and wants to help the couple in their quest… or so he claims. It’s the numerous running subplots such as this – not to mention whether Guybrush will actually be able to reattach his zombie hand – that are currently propelling Tales of Monkey Island; and I have faith in Telltale’s ability to wrap these chapters up into a cohesive but not entirely predictable conclusion. As I forecast in my review of the first instalment, Chapter 2 allows access to a navigational map, with six islands accessible in all, though Flotsam Island is now unapproachable due to the persistent winds. While there are perhaps no more new environments than in your average Telltale adventure, this newfound freedom definitely lends the game a far grander scope. The irritating and time-consuming jungle maze puzzle has thankfully not returned; in fact, there are no situations in this chapter that cannot be solved within ten minutes or so. While none of these minor adjustments prove revolutionary, they help make Chapter 2 a far more accommodating experience.

Yet despite the introduction of an entirely new race in the gender-ambiguous Vacaylian mer-people, ‘The Siege of Spinner Cay’ at times feels a little underpopulated. There are no trading towns to explore in this chapter, and characters such as Captain McGillicutty and his bungling stooges Hardtack and Trenchfoot just don’t have a strong enough brand of identity to rival classic characters such as Smilin’ Stan or Murray the skull. That said; Winslow, Guybrush’s first mate aboard the Screaming Narwhal, and his excessive sycophancy is quickly becoming the highlight of this series so far. No insult swordfighting this time around either, sadly, though it is lovingly referenced in a way that suggests later. On the technical side, ‘Spinner Cay’ is as polished as its predecessor. The visuals are crisp and the locations diverse, if the character designs on several of the minor characters aren’t nearly as distinct as they could have been. The voicing acting is also up to Telltale’s usual standard, though the sudden shift in temperament that those in the early stages of the Pox exhibit isn’t nearly theatrical enough, and the joke falls flat every time. My main issue with Chapter 1 was the control scheme, and this hasn’t changed at all. Given the leisurely pace of this point ‘n’ click descendent, this isn’t as much of an issue as it might have proved in another genre, but it’s a shame that the developers have ditched the effective gamepad controls used in Wallace and Gromit’s Grand Adventures.

Almost as soon as you’ve installed ‘The Siege of Spinner Cay’ the credits are rolling and you’re left to ponder the fate of Threepwood and company for another four to six weeks. That’s not to say that this particular adventure is especially short – I’d estimate that it took an hour longer to complete than the first episode’s three – but that it sails by at such as pace that you can’t help but unappreciatively hanker for more, sooner. Only time will tell if Telltale’s most ambitious narrative delivers, but for now the humour, characters and overall execution of this nostalgic voyage are being so capably administrated that I’m perfectly happy to wait another month. And then another. And then one more.