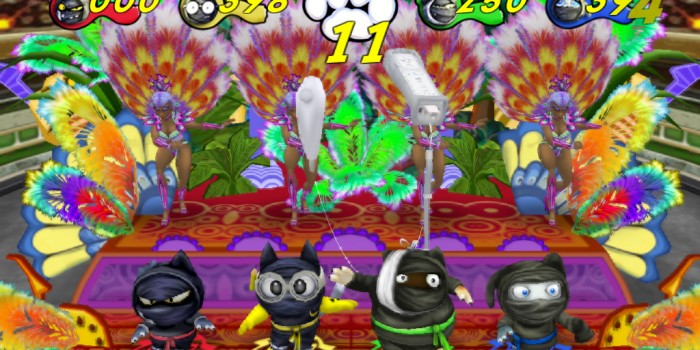 When Nintendo first debuted the Wii’s innovative technology at E3, the internet swiftly burgeoned with articles and forum contributions speculating on ways in which the novel Wiimote and nunchuk controller could reinvent how we played everything from platform games to first-person shooters. Some fantasised a Jedi simulator complete with motion-sensitive lightsaber duals, while others anticipated a more immersive FPS experience. Oddly enough, few pre-Raving Rabbits seers predicted that the Wii would be host to a new breed of party game involving four drunken buddies (and grandma) performing ludicrous physical locomotions in the name of jocular competition. Ninja Captains, a party game from Lithuanian developers Nordcurrent that also sees release on the DS, transparently aspires to the trademark irreverence that made Rayman’s cotton-tailed antagonists so agreeable, with 20 minigames involving four ninja felines and their various misadventures around the globe to thwart a giant robot mouse. The initial level, which requires you to present barf bags to vomiting passengers aboard a turbulent plane, is as good an example of the game’s tomfoolery as any.

Ninja Captains offers only two variations on the one mode: a single player Story Mode in which up to four players can participate, and a Party Mode offering a free selection of the same minigames. The story mode features some deliberately cheap but charming cut-scenes which will appeal to fans of The Behemoth’s Alien Hominid and Castle Crashers, but must be completed to unlock all of the games in Party Mode. This is somewhat against the social nature of this style of game, though the story will take even the most unseasoned of gamers little longer than two hours to complete. More severely, the story mode features no points tally system or tournament option, making each small victory feel rather inconsequential. As with any party game, the events tend to vary in both approach and consistency. Some of the better examples, such as a surfboard balancing competition, present a satisfying level of challenge, and there is a small degree of replayability presented by the shuriken medals awarded for achieving a certain number of points in each stage. Some events, however, are horrendously unfair, particularly a stage which requires the ninja cats to navigate an unsteady cruise liner while balancing stacks of bowls and avoiding sliding tables is definitely impartial to the two players on either far side. Few stages last longer than 60 sixty seconds, but chances are you wouldn’t want them to.

Those who struggle to earn the equivalent of a bronze score on any stage in Story Mode will be offered the chance to switch into Baby Mode. Not only does this make the single player experience potentially even shorter, it feels somewhat misplaced. Whereas the comparable Ninja Dog difficulty in Ninja Gaiden was a nod to the series’ hardcore following, it seems almost cruel to belittle the younger gamers who will comprise much of Ninja Captains’ audience.

In terms of presentation, Ninja Captains is also a mixed bag. The four character models are appealing enough, but the locations are incredibly inconsistent. Some stages, such as the Mardi Gras carnival parade, are pretty enough, while others, a skydive stage in particular, are an assault on the eyes. The game is at least visually diverse, with each stage is set in a separate nation, where activates range from street performing in Covent Garden to serving hungry punters in Berlin. The sound on the review copy I received was stuck in an infernal four-second loop, so I cannot comment on it; presumably this is not a trait found in the retail version.

With only 20 minigames in all, a lack of online capabilities and a single player mode that many will push through in just over an hour, there’s very little in Ninja Captain’s barebones package to recommend. There’s a fair share of quality minigames here, but it’s difficult to see who Nordcurrent are aiming the game at. Some stages are disappointingly simple, others inharmoniously challenging, and several require the endurance of an Olympic rower. A few, specifically an infuriating window cleaning episode, are also difficult to get to grips simply from reading the inexplicably fuzzy loading screen instructions.

If Ninja Captains fell into one of these categories, be it easy, tough or knowingly obtuse, it would be easier to soften to the ninja cats’ charms. The quirky brand of humour and a £19.99 budget price tag (though many online stores appear to be offering it for pre-order at £14.99) may justify purchasing Ninja Captains specifically for a gaming night or two, even if there are older, more fulfilling examples in the oh-so oversaturated party game genre currently selling for less. There is fun to be had with Ninja Captains, just not nearly enough of it.