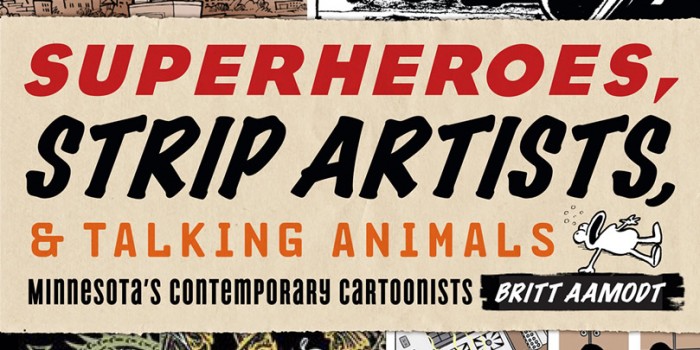 Beneath the colourful imagery, comic books have always held a certain tragedy. Behind every fantastical world and heroic individual rising against the forces of evil there’s some poor, solitary soul confined to a drawing board, wondering how they were ever naïve enough to believe that drawing/writing comics could pay the bills. Under every tale of a man realising his destiny there’s an underappreciated scribe ready to move on to the next job.

Superheroes, Strip Artists & Talking Animals: Minnesota’s Contemporary Cartoonists studies such lowly creatures within Minnesota. Pop culture journalist Britt Aamodt’s decision to confine her selection of comic artists to a single state may initially seem limited in scope, but this couldn’t be further from the truth. Having witnessed such legends as Superman artists Wayne Boring and Curt Swan, and EC influencer Wally Wood, Minnesota is now home to such contemporary talent as Peter Gross, Dan Jurgens, Ryan Kelly and many others. The book is essentially a series of artist profiles, each including samples of said illustrator’s work; which, to the casual comic reader more concerned with comic Hollywood adaptations than the source material behind them, will hold little interest. To the aspiring cartoonist or comic illustrator, however, SSA&TA offers an often fascinating, and always inspiring, taste of not only the bull-headed determination required to “get into” comics, but the sacrifices made by many creators in order to stay there.

These profiles are separated into three sections: cartoonists, mainstream comic artists and indie/underground/self-published artists (call them what you will). Either as testament to Minnesota’s resilient comic book community, or simply a sign of the times, the latter section is the largest, and paints an optimistic outlook for the comic medium, if not the comic industry as we currently know it.

Britt Aamodt treats each of her Minnesotan comic artists with a reverence usually reserved for Van Goth and Monet, transforming their individual upraising into veritable mythologies. Each creator’s origin story is told with such gravitas that, in the unlikely event that this book was ever made into an audio book, it’d be narrated by Voiceover Man.

But hey, it’s about time somebody gave these guys some wholehearted appreciation, and if there’s a theme that runs through Superheroes, Strip Artists & Talking Animals, it’s the artist’s eternal struggle to balance personal projects with ones that’ll actually earn them money. A sentiment perhaps best encapsulated in this wonderful line from Aamodt: “If Leonardo Da Vinci had been born in Minnesota in the late twentieth century, he too probably would’ve found himself designing fundraising posters and business logos rather than the refectories of catholic monasteries.” Nuff said.