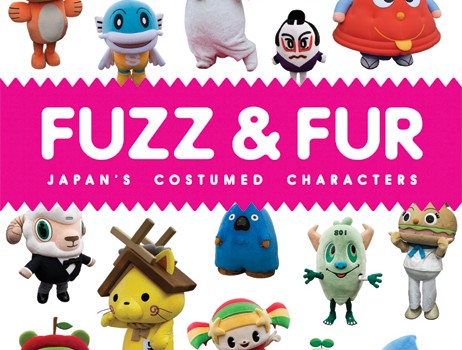 Press Release: The adoration of mythical creatures and popular anime characters is nothing new in Japan, but kigurumi, roughly translated as “fur suit mascots,” is a growing pastime that is also a marketing tool. An oversized daikon radish, a skiing egg, a bear with an apple for a head, a volcano sticking out its tongue – these furry mascots wander the streets of Japan, and the pages of Edward and John Harrison’s Fuzz & Fur.

Created to promote a prefecture or institution by honoring landmarks, local points of interest, regional produce, historical figures, civic institutions, and traditional folklore, municipalities have taken advantage of their citizens’ willingness to design costumes and dress up as these characters in a strange amalgam of hometown pride and cost-saving measures.

Being chosen to fill the role of a kigurumi is a chance at local stardom, as the authors explain in their introduction: “The characters have background and personalities. Blogs and websites are made, merchandise produced, and they regularly make appearances at events and on television. Some even release books and have Twitter accounts.”

Profiling over 100 kigurumi with photographs and text that explains these mascots’ origins, as well as their likes and dislikes, Fuzz & Fur is the definitive compendium of this fascinating subculture, and the perfect companion to Edward and John Harrison’s Idle Idol, which documents three-dimensional Japanese mascots. Edward Harrison is a designer and illustrator living in Tokyo. He enjoys taking photographs of strange signs and rusty Kanji. When not creating his own characters for clients including Adidas, Redbull and Eurostar he likes to track down and document Japanese mascots.

John Harrison is a designer and illustrator living in London. When not creating websites and animations for clients including Myspace and Nickelodeon he likes to try and avoid injuring himself while cycling and learning Taekwondo.

Mark Batty Publisher (http://www.markbattypublisher.com) is an independent publisher dedicated to making distinctive books on the visual art of communicating, showcasing the visual power and innovation of contemporary culture in all of its varied poses. Today, the visual comes at us from more places than ever, and its dissemination is faster and more advanced every year. Books from Mark Batty Publisher capture this acceleration on the pages of every book. Affordable, well designed, thoughtfully created, and produced to last, MBP books are artful products that readers want to hold onto forever.