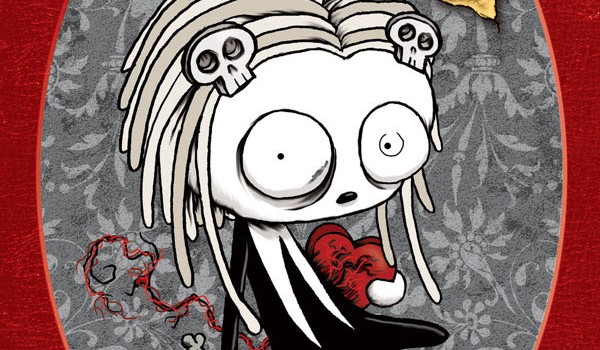 Cooties is the third hardback outing for Lenore, a quirky gothic minx who’s featured in a regular comic series and several animated shorts, and seems destined to grace black T-shirts for many years to come. Collecting the final third of the original Slave Labor Graphics run (entitled Lenore, the Cute Little Dead Girl) the collection has once more been brought to life through the gift of colour, and makes you wonder how the series could ever have survived without it.

For the uninitiated, Lenore is a manic and immoral living dead girl, with cutesy skull hair clips and a vampire-turned-puffy-doll called Ragamuffin for a best friend. A plot synopsis or “story so far” would be quite redundant; Lenore goes at its own unique pace, with creator Roman Dirge throwing insanely random encounters, bizarre cartoon strips and even brief autobiographical pieces into the mix. This volume deals with Lenore’s escape from Heck (after dying a second time round), and features sadistic flesh-eating mice, Nazi zombies, a new pal in the form of bucket-headed bounty hunter Pooty Applewater… and further disturbing cameos from everyone’s favourite button-eyed pederast, Mr. Gosh. Usually the final paragraph of my review for a book such as Lenore: Cooties begins with the acknowledgment that I’m probably not its target audience, and therefore not the ideal person to be reviewing such an effort. And while I’m certainly not gleefully morbid or (last time I checked) a teenage Goth girl, I thoroughly enjoyed Dirge’s endearing art, charmingly gruesome characters and overall irrelevant tone. In an age where every almost comic book is conceived as an ongoing epic, it’s comforting to know that there are creators like Roman Dirge out there, doing their best to keep comics immediate and fun… in a gory, macabre, depraved kind of way, of course.

Additional Content: An art gallery from numerous comic artist fans and a foreword by Neil Gaiman.