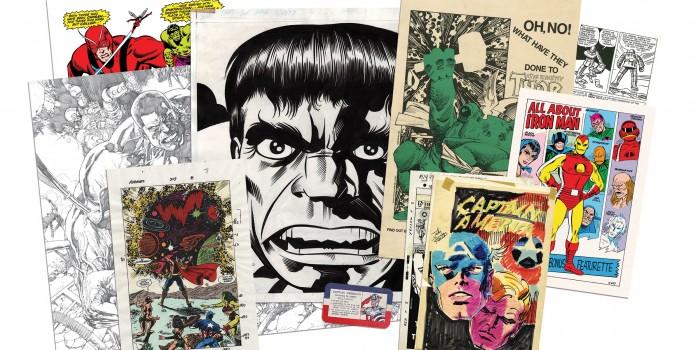 Given both DC and Marvel’s rich history, and that their output currently exists in a state of perpetual reboot, it’s not surprising that there has recently been a plethora of introductory guides and encyclopaedias aimed at fans of the cinematic universes that are understandably bewildered by decades of comic book continuity.

The Avengers Vault presents a visual history with an admirably clear focus on Marvel’s flagship franchise, from its 1963 debut to the (already dated) present. The book is divided into six sections: the team, Captain America, Thor, Iron Man, Hulk… and an incredibly brief chapter looking at Hawkeye, Black Widow, Falcon and the other poor sods that the casual Avengers fans probably couldn’t care less about. Each chapter also contains several removable “features” in the form of reproductions of artwork, concepts and colour guides upon which the Avengers’ legacy was built. Examples include John Romita’s colour guide and original art for Captain America #114’s cover, Leinil Yu’ s pencil art for the more contemporary Indestructible Hulk #1; and my personal favourite, a replica of the 1941 Captain America ‘Sentinels of Liberty’ membership card.

These extras don’t really add anything significant to the book, but neither do they detract from it. Sure, you’ll likely only remove them from the sleeves once, but they’re fun.

In fact, the best thing about this tome is Peter David’s immensely readable account of the team and its history. David holds back on his trademark humour for the most part, even if it does creep in during the Hulk portions, but it’s a fun and surprisingly candid retrospection of the team and its origins that doesn’t have the dry press release tone of similar books. Unfortunately, the book’s copy suffers from ghastly double-spaced typesetting, which makes the pages appear more spacious than a book with such aspirations of comprehensiveness should be. As a result the book feels a bit cheap, as thought the publisher run short of words to fill the page count; but even if that was the case, it’s difficult to believe that insufficient copy couldn’t have been compensated for with the addition of a few more images.

That said, these “vault books” and their incorporated miscellanea are often incredibly expensive, and given its £25 price tag, The Avengers Vault is somewhere at the more affordable end. The book is somewhat generic in its presentation, and the erstwhile comic collector will likely be more than familiar with the key characters and own much of the additional material in some form, but David’s solid writing makes this a recommendable gift for anyone whose interest has been piqued by the Marvel cinematic universe and would like a guided tour by one of the most prolific writers in comics.