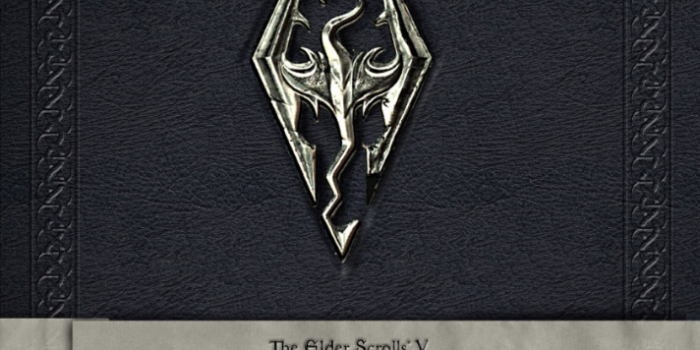 I believe that reviews benefit from a bit of disclosure whenever relevant, so I guess it needs saying that when it comes to RPGs I’m one of those gamers. The sort whose avatar is essentially the village idiot with an expensive suit of armour and a magic sword. I’m a busy man and I don’t have time for reading up on a game’s lore when there’s the opportunity to thwack things with said sword and casually make the sort of grand decisions that will impact the virtual lives of millions.

However, just as Hemingway defined the importance of research with his Iceberg Theory, I need that background prose to feel truly immersed in a fantasy environment. Sure, I’ll likely read less than 1% of it, but it’s the fact that you can drown in metafiction if you so choose that makes the Elder Scrolls world of Tamriel so engrossing for casual players and hardcore fans alike. About this book, then… The Skyrim Library Volume 1: The Histories is essentially a collection of those metafictional texts, bound in a lovely embossed faux leather hardback and populated with concept art and sketches that give the book the overall effect of an ancient tome.

As the title suggests, this first volume is focussed on the history of Skyrim and it’s feuding factions. While the material is admittedly less riveting when removed from the game, it’s the ability to delve randomly into Skyrim‘s background at your leisure that makes The Histories such a delight. The folks at Titan Books have opted for a finer, courser paper than usually found in comparable books, with the copy styled to resemble calligraphic scribblings across yellowed parchments. Two more volumes are on the way for the Skyrim libraries: Man, Mer, and Beast and The Arcane. A further two volumes will be dedicated to the decidedly less well-received Elder Scrolls Online, though in all fairness that game’s shortcomings had little to do with Bethesda’s ability to create the sort of rich virtual worlds that could warrant such a book. It’s testament to Skyrim‘s talented writing team that such a thing even exists, let alone five volumes of it.