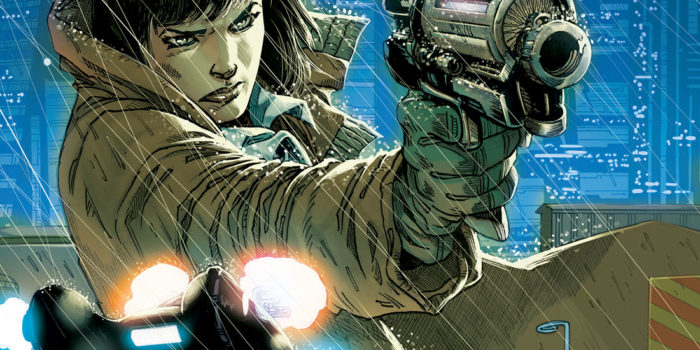 Due to other commitments, I’m ceasing the regular comic reviews here on Shelf Abuse. However, I will continue to blog with a new monthly column about comics, possibly gaming and cinema, using a new or classic work to springboard a discussion on storytelling and the creative process. At least that’s what I kid myself this will be…

Like a sucker I used to lap up every major non-prose Star Wars release with a truly worrying lack of discernment, but it took 2011’s MMORPG The Old Republic to finally make me realise just how little the Expanded Universe had done to… well, expand George Lucas’s original vision.

The Old Republic’s character classes were limited to the point of parody. Want to play a smuggler? Then you’ll receive a ship that vaguely resembles the Millennium Falcon and an obligatory Wookie sidekick. Want to roleplay as a bounty hunter? Here’s a jetpack, wrist-mounted rocket launcher and a helmet that’s reminiscent of everyone’s favourite Mandalorian.

It’s been long apparent how many other popular franchises or intellectual properties are prisoners of their original material, and especially evident in Hollywood’s recent reboot attempts. Star Wars: A New Hope had stormtroopers, smugglers, a desert planet and a WWII-inspired dogfight, therefore all subsequent material set within its universe must provide the same. This year’s Terminator: Dark Fate was particularly guilty of a such laziness, treading hopelessly between remake and sequel, and fulfilling the requirements of neither.

But this devotion to that one culturally significant work often only serves to make its fictional world seem smaller and its possibilities fewer, conjuring the flashback scene in Goldmember, in which Austin Powers and Dr Evil are shown to have been adversaries during school.

An adaptation of a Philip K Dick novel that gradually became its own unique entity, Blade Runner may not be as lucrative a franchise as Star Wars or Terminator, even if its influence on modern science fiction arguably runs deeper. The 1982 Ridley Scott movie’s cyberpunk elements and noir aesthetic are so ingrained in popular culture that the many attempts to imitate it have struggled to distinguish themselves from that singular effort.

That’s pretty much emblematic of the problem with cyberpunk – for a subgenre that proved to be so prophetic it’s still stuck in a neon-lit eighties, a nostalgic future formed from green binary code and punk hairdos. But if there’s one strangely predominant motif throughout the media that attempted to replicate Blade Runner, from Snatcher to Ghost in the Machine to Deus Ex to Altered Carbon, it’s that every one of these works features a primary character in a brown (or at least dark) trench coat. It’s as if those responsible for such projects fear we’d fail to acknowledge their work as cyberpunk purely based on its plots and themes. With this one small costume addition a character ceases to be a living person in an alternate world and becomes a stereotype; a cosplayer who looks the part rather than an individual shaped by their surroundings.

The underrated 1997 PC adventure game sequel, simply titled Blade Runner, featured Ray McCoy, another detective in a trench coat who was Rick Deckard in everything but name. Much like The Force Awakens, Denis Villeneuve’s stunning Blade Runner 2049 became victim to its own genre defining tropes, even if the line between sequel and remake were more dexterously blurred. Ryan Gosling’s K wore a fleecier take on the trench coat, his parallels with Deckard the most engaging part of the film.

I do appreciate that it’s all too easy to be a couch critic and criticise commercial products for not being more adventurous. Most of my own creative choices usually come from necessity rather than choice. In their defence these tropes act as an assurance to the unconverted, visual prompts that those only barely familiar with the original Blade Runner, perhaps via the films and video games it inspired, can identify and feel as if they know what they’re purchasing. Few cinemagoers will be able to keep up with the Terminator franchise’s self-sabotaged timeline, but they’ll all recognise Arnold Schwarzenegger as the titular killing machine.

Playing safe didn’t pay off for Blade Runner 2049, which was heavily (and I’d argue unfairly) criticised for its preciousness towards for the source material, underperforming at the box office despite pleasing the majority of critics and fans. I personally adored the film, even if I felt it could have ventured further outside of the iconic landscape defined by its predecessor. Nevertheless, 2049 seemed doomed to fail: casual older viewers felt they’d seen it before and younger viewers simply didn’t give a shit.

On to the first volume of Titan Books’ new Blade Runner 2019 series, then. 2049 co-writer Michael Green and Mike Johnson (Supergirl, Star Trek) opted for the trench coat method when plotting out Titan Books’ new 12-part Blade Runner 2019 series, or at least initally. That 2019 suffix is, of course, a nod to both Villeneuve’s movie and the fact that the original movie was set in the distant future of… now. We’ve not a flying car or android to look forward to any time soon, only irreversible environmental catastrophe.

The series follows Los Angeles detective Aahna “Ash” Ashina, a colder character than Deckard with a bloodthirsty disdain for skinjobs. And yes, she wears a trench coat almost indistinguishable from Deckard’s. Yes, she takes her latest case while eating at a Chinese food stand. Yes, the iconic spinner (flying car to the layman) is featured extensively. Even the smaller details are all-too familiar; the wealthy client whose missing daughter becomes the crux of this series is introduced via a synthetic pet.

Yet while the early issues of Blade Runner 2019 are content to use what have almost become genre clichés to introduce us to Ashina, and a case that is clearly more complicated than it initially appears, Green and Johnson soon make it clear that they’re also going to dispense with those formalities and take us on an odyssey through parts of the Blade Runner universe that have until now been left to the imagination.

Andres Guinaldo’s (Justice League Dark, Captain America) art captures the series’ dystopian cityscape and lived-in interiors to a T, while Marco Lesko’s neon drenched nights and soft lighting is ever on hand to remind us that this is a retrofitted future based on a timeless movie. The early issues in the series are at their most interesting when Guinaldo teases us with glimpses of the world beyond the recognisable polluted cityscape shown in Syd Mead’s significant concept art. When Ashina passes over Santa Barbara, flooded to create “sea-locked estates for the blessed”, we get a sense that this future is pretty bright for a select few. Her investigation leads her to a replicant who has undergone cosmetic surgery to look old in order to avoid suspicion – replicants aren’t granted the privilege of old age, see.

As you might have deducted, I’m not usually a fan of movie spin-offs in comic form, but against my initial qualms Blade Runner 2019 gets off to a really solid start. This is a 12-part series, and the first four issues contained within Blade Runner 2019 Vol. 1: Welcome to Los Angeles clearly only touch the surface of a grander conspiracy. The final pages reveal the true motivations of the sinister and ubiquitous Tyrell Corporation, and even tease a trip to the off-world colonies.

Only in Issue #4, when the series begins to truly break from the rigid formula established by its prototype, and the action moves from cyberpunk Los Angeles to a replicant encampment on a barren island, do Blade Runner 2019’s visuals suddenly feel less “Blade Runner-esque”. Hey, maybe I was wrong, and just maybe Michael Green and Mike Johnson knew we needed to be immersed in the familiar before they could take risks with their maxiseries. But it’s no coincidence that Issue #4 marks the point at which both the series and its amoral protagonist find their own identity. It’s also no coincidence that this is the issue in which Ashina ditches that damn trench coat.

Blade Runner 2019 Vol. 1: Welcome to Los Angeles is out now, from Titan Comics. This post is also the fourth entry in a corresponding blog tour, which you can follow using the image below.

One thought on “So Very Tired… #4: Blade Runner 2019 and the Trouble with Trench Coats”