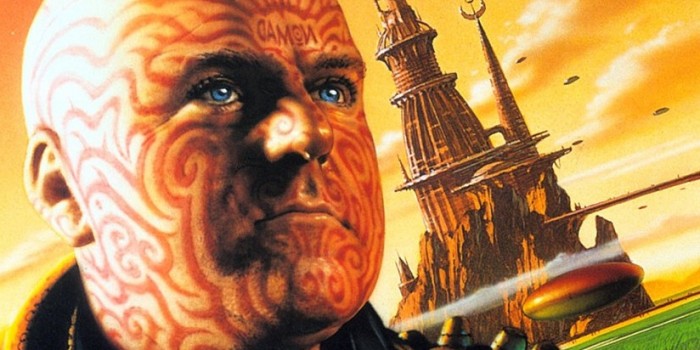 Hey there, stranger. Welcome to the first instalment in what I hope to be a weekly column, Bloody Forehead. This regular will essentially form a creative diary of sorts, chronicling my thoughts, ideas and fist-shaking rants as I get ready to self-publish, promote and develop my debut novel Welcome to the Fold and webcomic project The Scribe, and any other matters of the quill that happen to drift into my flittering consciousness.

Future generations will study this column to attempt to ascertain just what spark of genius inspired me to write that successful series of novels that I’ve yet to come up with the idea for. Or some shit like that. The name of this column? A reference to a classic line from the late, great Douglas Adams: “Writing is easy. You only need to stare at a piece of blank paper until your forehead bleeds.” Which, I guess, provides as good a transition as any for my first entry in this here web log. You see, I have a severe problem, a personal issue which has seen me struggle with unemployment for many years, made me hell to be in a relationship with, and ensured that my life never gathers momentum in any significant way.

As of writing, I’ve several unfinished novels under my belt, a dozen unfinished paintings, several dozen more rough drafts of short stories, a few comic books that were abandoned just a few pages in, around 20-30 scripts that I’ll probably never return to, possibly over 50 unfinished articles/features… you get the idea. Over years I’ve also thrown away numerous half-built models and sculptures, designed characters that I’ll probably never get round to writing or illustrating again, developed websites that will never see the light of day and… I’ll just stop there.

Writing this admission of guilt should be the first step towards rehabilitation, but I doubt that. It’s easy to say “there is no ideal time to start writing, just get on with it.” Not so easy to put such sentiments into practice. Last month I attended a masterclass at Southend’s Horror-on-Sea Film Festival, held by low-budget horror movie maker Pat Higgins, whose contribuitons include the likes of Hellbride, TrashHouse, KillerKiller and Strippers vs Werewolves. I don’t think much more needs to be said about Pat’s filmography beyond those wonderfully trashy titles, and I’ll be honest and state that I am by no means a fan of the sort of gory straight-to-DVD (or, as is increasingly becoming the case, straight-to-digital) genre fare that he produces.

But, as this unpretentious and likable (as the people behind the most gruesome films and books usually are) filmmaker chatted away, he revealed not only an unrelenting passion for what he did, but a good sense of self-promotion in the digital age and a realistic, humble perceptive on the sort of movies he made. Pat wrote/directed/produced the sort of films he enjoyed making; nothing more, and certainly nothing less. Movies made on a shoestring budget, in which no actor could expect to leave the set without being covered head to toe in red syrup.

I left Higgins’ masterclass feeling  like I’d undergone a minor epiphany, only for this sensation to subside the moment I’d settled down at my keyboard and accepted the fact that I’d never level of professionalism in my storytelling. Unlike Pat Higgins, who appeared to be under no illusion that his films were marketed to a very particular (but enthusiastic) genre audience, I seem to be stuck in “magnum opus” mode, forever toiling away on an epic masterpiece which will never be half as good as my ever-elevating standards expect it to be. In an interview in issue 1 of the new comic anthology/magazine Off-Registration, Fred Van Lente (The Incredible Hercules, Cowboys & Aliens) was asked what advice he would give to himself as a younger aspiring writer. His answer: to stop wasting time “trying to get things perfect” and “to be seen by any means necessary.” A wonderful sentiment, but I doubt the detail-obsessed perfectionist within me would listen. Those few who’ve read any of my shoddy SEO-driven articles quit sniggering, please.

I believe a little history is required here. I originally began shelfabuse.com almost 5 years ago, as a way of coupling a webcomic project with my desire to developed a home for intelligent comic book and sequential art criticism. The idea was that the two would feed of each other, boost one another’s search ranking, and generally get along hand in hand. 5 years later, and the webcomic section is still in a state of… shall we say non-existence. I’ve worked on it, sure, but the hours haven’t quite reaped the output they should have. Perhaps it’s something to do with the fact that I’ve now scripted #1 of The Scribe for the ninth time.

Maybe this “quest for perfection” is an illusion, an alibi that I’ve recycled for far too long. Nevertheless I find myself stalling; perhaps out of fear, out of some paralysing dread that these precious little fictional worlds of mine aren’t quite as worthy as I’ve led myself to believe. Perhaps it’s easier to convince oneself that these creations of mine are better off contained within the confines of my cranium, destined to be forever appreciated by an audience of one, than unleashed into the world only 99.99% complete.

Next month I plan (emphasis on plan) to release my first novel, Welcome to the Fold, on Kindle… or at least the first half of the novel. The basic idea behind my business model is to offer the first half of the book – which, at around 100,000 word is actually the same length as your average debut novel – for free, and to then release the second instalment several months later.

While I’d like to argue that, in the age of the Kindle such sacrifices are necessary (few are likely to give an unproven novelist the time of day if they’re being given the book for free, let alone if they’re being charged for it), the truth is that the only way I’ve been able to finish Fold, which has taken nearly 9 years to finish, is by dividing the book into 4 parts, and treating each part as though it were an episode in a TV drama. Or, to implement an even better analogy, issues in a comic series. This approach has forced me to finish one “episode” at a time, and I vow never to return to the 2 parts that are now, finally and forever, completed. Any parts that have been trimmed will have to wait for the intended sequel, which at this rate should be finished by the year 2032… But, to end things on a positive note, taking this approach with Welcome to the Fold has given me a renewed admiration for those authors who were forced to meet uncompromising deadlines, or churn out work that perhaps wasn’t their best. I look at my bookshelf and I see The Stars My Destination by Alfred Bester, Ray Bradbury’s Martian Chronicles, a Sherlock Holmes anthology, V for Vendetta and far too many other great trade paperbacks to mentions. Supposedly disposable tales that were either originally written in serialised formats or produced for periodicals, only to find appreciation in their collected formats decades later.