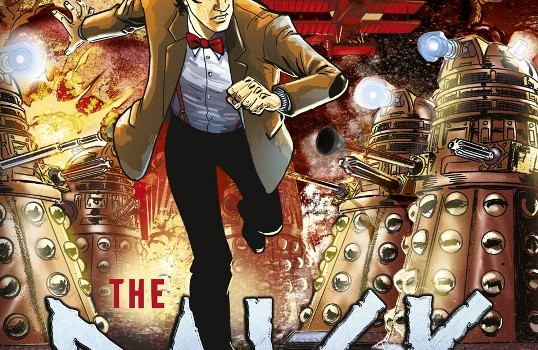 I am not very knowledgeable when it comes to graphic novels – I would even go so far as to say that calling me a novice would be an incredibly generous use of words – but something I am very familiar with is the mighty Doctor Who, and I’m not one to let a small thing like ignorance get in the way of writing a review. Justin Richards and Mike Collins have created The Dalek Project, a gorgeous looking graphic novel in which the Doctor finds himself at a French archaelogical excavation site. Extraordinary artefacts from the Bronze Age have been recovered from tunnels and pits all around the area, but the Doctor has found something much more remarkable lurking amidst the historic treasures.

After helping to exterminate some of his mortal enemies, in true Doctor Who style the Time Lord whisks away one of the (female) archaeologists and travels back in time to discover why the Daleks have imbedded themselves in ancient human history.

The Tardis reappears during World War One outside of an English stately home. It had been emptied at the beginning of the Great War, as were many large houses during the time, yet something is not quite right about this one. It is being used for something sinister, a base camp for something significant involving the war, but how and why are the Daleks involved?

As I have mentioned, I am no connoisseur when it comes to graphic novels or even art in general, but I adore the aesthetics of this book. The images are crisp, intricately detailed and incredibly striking. Each full-page animation would look stunning as a stand-alone framed print on my wall, and I find myself particularly enthralled with the war-torn backgrounds.

The plot is solid and compelling, reminding me of the television show back when it was in its prime. Unfortunately, as Matt Smith is a fairly bland Doctor, I feel the story struggled at times to carry the dead weight produced by lack of characterisation, but this is an issue with the overall franchise and not the graphic novel itself.

The Dalek Project is definitely one for the fans and will not disappoint those who have felt dissatisfied with the previous few series. It is a great example of what a Doctor Who story should be like and features (in my humble opinion) one of the best monsters ever created in science fiction. It also illustrates that there is something lacking with Smith, who has had zero impact on this much beloved show.