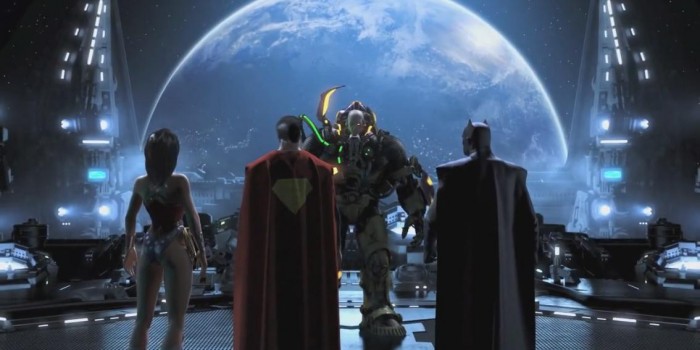 I always had a lot of time for DC Universe Online, Sony’s attempt at an accessible MMO which, while not ultimately the revolution it promised to be, was a fun button-masher that didn’t require one to dedicate their life towards reaching the maximum level in order to have “fun”. The DCU was also a world that I enjoyed returning to regularly; the vast cityscapes of Gotham and Metropolis still hold countless cameos, comic book references, landmarks and bosses that I have yet to discover.

Unfortunately, DCUO struggled to hold its audience for more than a couple of months. This was mostly due to the fact that the initial tsunami of players were able to reach level 30 within a fortnight and found themselves in a sparse, impersonal environment with little to do and, more importantly, little to justify a monthly fee. Yet while the shift to a free-to-play business model reportedly saw a boost in players and profits over the traditional subscription  approach, one has to wonder how much longer European gamers will be able to enjoy taking on Doomsday, Luthor, Sinestro et al. For several months ago Sony Online Entertainment announced that it would be handing its European servers over to German media company ProSiebenSat.1.

Since the handover, DCUO hasn’t been a particularly hospitable place for us Europeans. SOE’s press statement reads “Expect more players and more focused attention on international players!” What the company really means is “We really can’t be fucked with this game anymore – consider it someone else’s problem!”

For one, the migration process, which requires you to set up a new ProSiebenSat.1 account and link that to your SOE account, was about as straightforward as the plot of Metal Gear Solid. After several days, during which I had been blocked from the game for entering the wrong user details one time too many (the ProSiebenSat.1 Games site just assumes that you’ll know which of your two separate sets of login details you’re required to enter at any given time), and a lengthy reinstall of the entire game for us Steam users, I was ready to get back into the DCU and enjoy the DLC packs that I’d bought in the Steam Summer Sale.

Those DLC packs no longer exist on my account, you see. Why? Because the ProSiebenSat.1 severs are only a necessity to non-Steam users. When I logged into the game’s LaunchPad  via Steam, I apparently made the mistake of following the game’s rigid instructions to make a new ProSiebenSat.1 account and link it to my existing Steam account. Never was any other option made possible.

ProSiebenSat.1’s customer support doesn’t seem to care. So far my two enquiries have been met with week-long waits and vague responses that require me to submit more details. I now expect to wait a third week for my next enquiry, a display of customer service inept enough to make me want to repeatedly bash my head against the desk until the dark thoughts go away.

Hopefully, if anybody has got to this point in this “article”, they might be able to share similar experiences in the comments section below… or even provide a solution. Though given how little interest in gamer experiences ProSiebenSat.1 Games has exhibited so far, I’m not keeping my fingers crossed.

Game uninstalled, forgotten about, moved on.

Or so I tell myself.

Which, I guess, is where I get to the meat of this column. This inane incident has made me ponder three gaming-related issues:

1) Us gamers are a contradictory bunch; while I had only a tepid interest in actually playing DCUO game a few weeks ago, I now hunger to explore those three DLC packs. I want to give my avatar Green Lantern powers, sightsee the game’s alt-future finale and grind through countless identical raids in a manner that I never wanted to before.

Can’t have it? No? Want it more than ever.

Somehow these DLC packs, which I’m sure contain more of the same old shit, have taken on a mythical importance in my life. A small segment of my brain is convinced that all of life’s trivial questions will be answered upon playing these unobtainable expansions. They clearly must be the greatest add-ons in the history of video game development, and off-limits to ignorant, unappreciative geeks such a  myself. Otherwise I’d be able to access them.

Complete nonsensical bollocks, of course, but I’m a geek, and therefore utterly irrational.

2) This petty little experience in my miserable life has also made me realise that I’m unlikely to go near another MMO any time soon. Ever since DVDs introduced the idea of a concise film library, I’ve always felt the need for my games to be permanent. I may never play Resident Evil 2 again, but I live safe in the knowledge that were I ever to want to, a copy sits on my shelf, or in a store, or on eBay.

The contrary, my friends, is somehow my worst fear. Even worse than being chased by a scalpel-wielding clown through an endless candy floss alleyway.

The idea that all of this will one day be forgotten…

My art, my literature, my stupid zombie games… I can’t imagine a future without them. It’s the same with DCUO; the idea that I’ll never be able to return to my sextet of super-powered heroes and villains and take them to Arkham Asylum or soar above the Daily Bugle, fills me with genuine emptiness and sadness.

It really shouldn’t, but it does.

3) My heart sinks with my newfound clarity regarding the video game and comic book industries. Why, just under two years ago, Jim Lee was in the spotlight promoting DCUO, while I watched video interviews with the developers as they touted the game’s unprecedented level of research and respect for the source material.

Two years is all it’s taken for SOE to abandon something that many people clearly put a lot of blood, sweat and tears into, regardless of whether the project was a success or not, and leave a third-rate German media group that few online commentators have anything positive to say about to run it into the ground.

Anyway, I hear Guild Wars 2 is really, really good. What was I saying again?

One thought on “The DC Universe Faces its Greatest Adversary Yet: ProSiebenSat.1 Games”