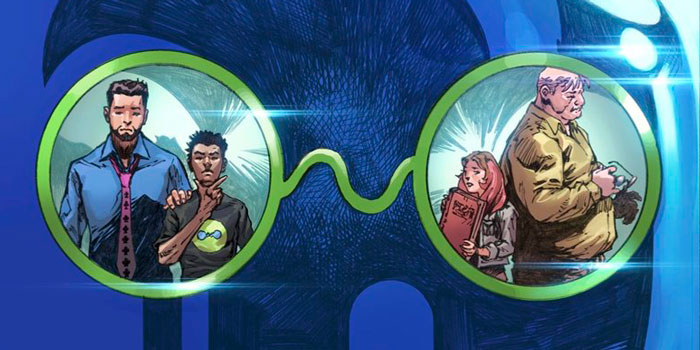 Dave Terruso, creator of the upcoming prose/comic hybrid Alter Ego: The Other Me (illustrated by Nicholas DeStefano), shares a simple but effective tip that may well improve your storytelling.

What I mean by “read like a writer” is this: read a story in the same type of headspace as the person who wrote it.

You don’t have to be a writer to read like one. And it doesn’t involve taking a creative writing class or an English literature class. It’s something anyone who can read can do.

All you have to do is read that story three times.

The first time you read a story, you’re consumed by the question What happens next? You may love the characters, you may savor the writing, but usually what propels you through that first read is the desire to know how things resolve.

The second time you read a story, you’re consumed by the ironies. So many lines read differently on the second go-round. You’re in a superior, godlike position— now you know that the dad who grounded his son for stealing a candy bar turned out to have embezzled millions from a charity.

While a writer may not know what happens next on their first draft, they certainly know by their second, third, or final draft. And many of those ironies you grinned about on your second read were put there intentionally to reward a repeat reader.

But on your third read, you experience the story in a very pure way. You know what happens next. You’ve already been tickled by the ironies. You find yourself able to zoom in on any detail you want—any line of dialogue, any simile, any word choice—and examine it with clarity.

Your third read is your first objective read.

Many of you already know this. You have a favorite book you’ve read so many times it looks like a dog chewed on it.

And if you didn’t know it, I highly recommend trying it. I’ve read my two favorite books, Richard Matheson’s I Am Legend and Ursula K. Le Guin’s The Lathe of Heaven, over and over again, and I find something new to love in both of them each time. It feels like the books change the more I read them, but actually the only thing that changes is my perspective on the world.

Give the third read a try. You won’t regret it. You do it with movies all the time. This is like that, but even more gratifying.

I just hope you love shorter books or graphic novels. Rereading a 900-pager is not for the faint of heart. My two favorite novels are both under two hundred pages, and that’s probably part of how they became my favorites, because there was nothing daunting about rereading them. They also both present a fully realized world in that brief time period, which impresses me no matter how many times I read them.

Dave Terruso is a novelist and stand up comic based in Philadelphia. You can read the first two chapters of his upcoming superhero mystery Alter Ego: The Other Me here.

Dave Terruso is a novelist and stand up comic based in Philadelphia. You can read the first two chapters of his upcoming superhero mystery Alter Ego: The Other Me here.