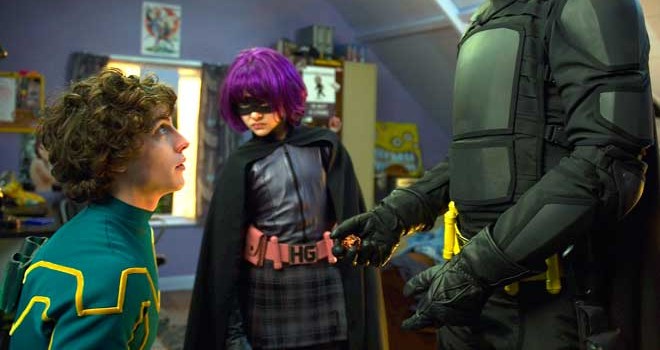 Fuck Avengers or Superman. If any kid wants a serious dose of real life whilst having a lot of fun, Kick-Ass is your book. Mark Millar is genuine genius and the guy I’d love to emulate if I wrote a comic book. Out of all the comic writers in the mainstream, I’d say he’s the one who understands his under 18s market better than anyone. Just read his run on Ultimate X-men if you don’t believe me….see? Shame on you, you Debbie Downers!

I saw the film before I read the comic and I loved it. It was part of that year when this, Inception and Scott Pilgrim all came out, trouncing Iron Man 2‘s balls (I’m soooooo sorry, Tony) in the creativity stakes and creating cool, smart cinema that also looks great on Blu-ray. But after reading the comics, you realise that Vaughn and Goldman made some serious compromises to the original text because, in all seriousness, if the film had been like the comic, teen suicides would probably be on the up. Like on the level they’d be if Bieber died. Kick-Ass the comic is, up to a certain point, very much like the film, though with better dialogue. Dave Lizewski is an in-betweener in school who likes superheroes and decides one day that he wants to be a real-life superhero; because being Spider-man is more interesting than being Paris Hilton. But after a series of events which are both horrific and funny at the same time, he ends up in hospital with many injuries, including broken bones, metal plates in his head and extensive nerve damage, creating his only real super power – that he can take a punch better than most…

After his time in hospital, Kick-Ass decides to hit the streets again and, after thwarting a gang of Puerto Rica gangbangers attacking a guy, achieves instant fame through the wonders of social media, sparking copy cats – including a guy called Red Mist, who is just as useless as Kick-Ass but his special power is affluence. What I love about Kick-Ass is that he is useless – the best scene showing this is when Kick Ass and Red Mist have to save a cat from a burning building. His intentions are good although misguided and, let’s be honest, we’d probably be about as good in those kind of situations. Leave it to the experts…like Hit-Girl.

The major divide between the comic and the movie is the Hit-Girl story. I dug the comic version because, to be blunt, it was more fucked up than the film was and even that was a leap into nuttiness. Rather than being a disgraced cop like in the film, Big Daddy is just a total fruit who was bored of his life, left his wife and trained up his only begotten daughter to be a serious crime-fighter. And if that’s not enough, he funded it by selling classic Marvel comics. It would be interesting to find out the motivations for this departure from the original, because all-in-all both versions make him a bit of a douche whether he be a disgraced cop using his only daughter as a instrument of death to avenge his enemies or a nut job who uses her to fight crime in a non-Silver Age style.

Hit-Girl is great though, isn’t she? Once you take out the killing with swords side, I think she’s a great character for young girls, especially when you see her equivalent in cinema being Bella from Twilight or that rubbish Hunger Games stuff. Her character’s portrayal in the movie is more or less identical to the comics, which makes the changing of Big Daddy’s story more bizarre, because the bi-product is still the same: a psycho-cunt swearing 11-year old! When you look at the two entities, you can see a pattern of the film writers trading off aspects of the comic for the film. But, oddly, the end result is the same, which makes you wonder if it was worth it. John Genovese is more fleshed out in the film and is more of a Lex Luther type antagonist, but in the end the same shit happens as it does in the comics. Dave’s rehabilitation is skimped upon in the film but, again, the end result is the same as in the comic. The only major difference that does not end up converging on the same ending is the subplot of Dave pretending to be gay; he doesn’t get the girl because Katie is so repulsed by what he did, she gets someone to beat him up, whereas in the film she’s OK with it and ends up dating him. The crazy thing is that their relationship is more pervy and twisted in the film, but she’s still OK with it at the end. Who said comics don’t mirror real life?!

So in the end, I think the comic wins. I don’t want to make out that I hate the film Kick-Ass; I guess sometimes changes are made to things which don’t need it and Kick-Ass is a good example. I like Hit-Girl, Kick-Ass is useless, Red Mist is a dick and Big Daddy is just odd and unlikable regardless of Nic Cage’s Adam West impression. The tweaks made for the film did nothing to change this. Also, the Kick-Ass film was independent, so it didn’t need to do them either. Mr Millar should have more conviction in his work.

There was one thing, however, that was way cooler in the film than the comic…The Dickies’ ‘Banana Splits’ theme.