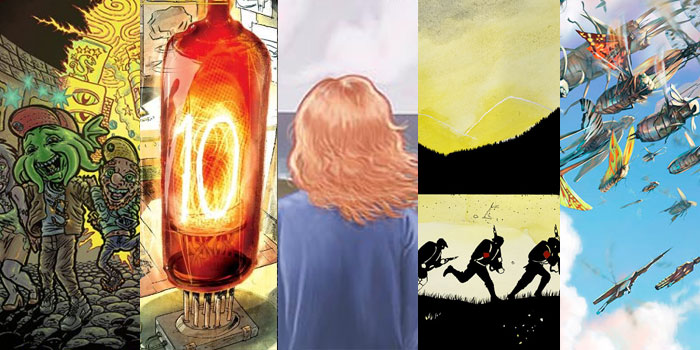 When I began this blog 6-7 years ago, with little clue as to what my “writer’s niche” would be, it didn’t take long for self-publishers and the small press to begin sending me review requests. And it was great, for a while. I felt like my reviews were having a positive impact on the comic community, albeit a small one – and to be fair they were – and my passion for comics was perpetually reignited by finding those little gems in the proverbial pile.

But the review submissions kept on coming… and coming… and my blog has now reached the stage where it receives more news story submissions and review requests than it attracts visitors. Were I to read, respond to or act upon every email I received, I’d have to give up my day job and live on Happy Shopper baked beans. And none of my loved ones want that.

I’m gradually moving away from blogging to concentrate on self-publishing and promoting my own material, but I still want to provide a regular heads up to any new indie titles that either pique my interest or enter my radar.

So, Indie Penance, a new regular feature, will be a chance to recommend the creator owned, small press, self-published and digital comics which have piqued my interest, as well as any lesser known titles I’ve enjoyed but simply don’t have the time to write lengthy reviews of.

It’s a case of “I started reviewing indie comics so I’ll continue doing it until I die.” Hence the title of this column/review/wotsit. So, without further ado, here’s a few smaller titles I caught in 2013 but simply didn’t have the time to write about:

First up is The Vale, a psychedelic blend of Withnail and I, Beavis and Butthead and Lovecraftian mythology. Brett Uren and F Harmon have created a bizarre world in which tentacled creatures from another dimension have taken over ours, but life remains pretty much the same as ever for those who didn’t perish or go insane; with the small exception that everyone now ceaselessly cries black tears.In the case of this irreverent series’ principal deadbeats Jan and Shugg, “same as ever” essentially means frequenting the local pub.

The Last West raised over $12,000 for a $3,800 pledge on Kickstarter last year, after restarting the campaign when Alterna Comics picked up the project . It’s easy to see why. This promising series thrives on a fascinating “what if?” science fiction premise: what if, after a failed 1945 experiment, mankind was unable to generate new ideas?

As with any high concept sci-fi concept, The Last West runs the risk of fizzling out in the final straight, but so far the execution has been superb. Evan Young and Lou Iovino have clearly thrown a lot into the 10-issue series’s narrative, which jumps between the day of the fateful experiment and a present deprived of modern technology, and the artwork is as detailed and polished as a mainstream title.

Any gay comic readers, or indeed any heterosexual readers looking to sample something with a different perspective on life will want to check out Northwest Press, a publisher “dedicated to publishing the best lesbian, gay, bisexual and transgender comics collections and graphic novels”.

Many of Northwest’s titles, such as Anything that Loves and QU33R, are anthologies in which artists offer their different takes on sexuality and gender roles, but there’s a fair bit of genre diversity on offer, including fantasy The Legend of Bold Riley.

My personal pick, however, has to be Positive, Tom Bouden’s poignant and beautifully story exploring a woman’s life after she’s diagnosed as HIV positive. Despite the subject matter, its an optimistic and beautifully illustrated tale.

I reviewed the first issue of Tony Keaton and Andrew Herbst ‘s Wolves of Summer last year, but with the limited series reaching its climax, there’s no better time to read it. This tale of a boy’s time in the Hitler Youth at the end of World War II and its long-lasting psychological impact on him into adulthood is a perfect example of why the indie comics scene is so exciting right now.

And, finally,  now for something completely different… Salsa Invertibraxa. Too many illustrated novels label themselves as graphic novels – which, to be fair they are – but Mozchop’s widescreen clusterfuck of magnified landscapes and vivid insects fits so perfectly in between mediums that it could be considered both.