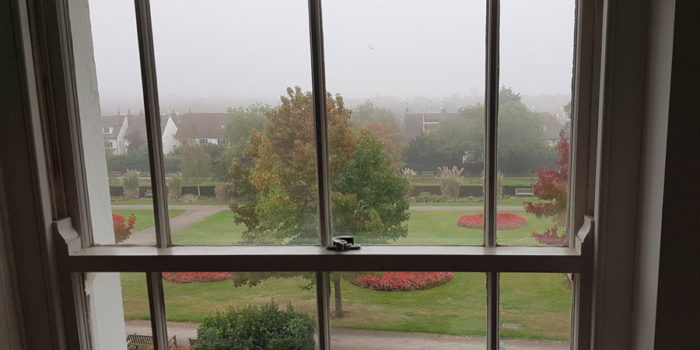 Now where was I? It’s somehow been six weeks since I last posted on here. That’s over a month in Earth time!

As the three people who’ve visited my social media feeds might be aware, I spent the first week of October participating in Southend Metal’s Inkhead Culture LAB, a comics workshop that I helped create and curate (alongside Metal’s Simon Monk and Nichola Streeten of Laydeez Do Comics). I also joined the ten selected comic creators for a series of talks and some personal development time at the inspiring Georgian Chalkwell Hall.

I spent the week feeling completely out of my depth, and was clearly only invited because nobody had the heart to tell me to go away, but it nevertheless proved to be an incredible time, with some great guests (Warren Ellis, Gary Spencer Millidge and Pratheek and Tina Thomas from Indian publisher Kokaachi) and a sense of unity amongst the artists involved that I really hadn’t anticipated. Sadly, I forgot to take any photos, except these two of my inspiring study spot. Fucking amateur… Usually I’d blather on about such a fine time in my life and the talents involved, but here we are a month later. To top off a painfully busy October, for the past three weeks I’ve been ill, horribly ill. I initially dismissed my sniffling as a common-or-garden cold, but given that last Friday I was hallucinating and ducking out of the way of imaginary ravens, it might have been a tad worse than that. Or maybe I’ve just been watching too much Game of Thrones.

In-between battling imaginary beasts, I did manage to write a 1000 word piece for Trawler magazine, a local “independent-minded, community-generated publication”. Trawler’s next edition  will include a 12-page Inkhead pullout. My introduction ended up double the length it should be, so if that doesn’t see print I’ll probably publish it here later this month.

Furthermore, Gary Spencer Millidge, whose support and enthusiasm during the week was very much appreciated, wrote this lovely blog post about his involvement. It’s far better than anything I would have produced. Despite my poor health the event did allow me to finally about to push beyond the chaff and focus on my upcoming webcomic anthology project, Tomorrow Will Be Worse. It’s been an exhausting but rewarding experience, though as usual I got a bit too carried away – rather than publishing the damn thing I decided to first design my own font. I’ll probably write about this next time, but needless to say much frustration and hair-tugging ensued. On an unrelated note, a few Saturdays back I enjoyed a talk by My Feral Heart writer Duncan Paveling, hosted by the Estuary Writers Group. Shot around Essex, My Feral Heart is a charming, heartfelt movie anchored by a brilliant performance by Steve Bannon, whose Down’s Syndrome is depicted with integrity, humour and a refreshing absence of schmaltz. It’s an understated little gem, veering into magical realism at certain points, and is unlike anything else I’ve ever seen. Please consider buying a digital copy from Amazon Prime Video for just a few quid.