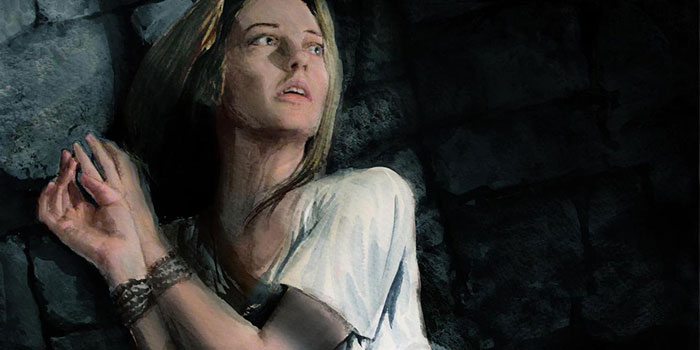 The debut graphic novel from creator Dmitry Yakhovsky and MadeGlobal Publishing, The Shadow of the Cross: Imprisonment is a grim medieval epic set around Carcassonne, 1243. The first of a 3-part series, it’s also lavishly painted in waterclour by Yakhovsky, whose depiction of 13th Century France is brilliantly realised and aims for a level of realism and plausibility not usually realised in comics.

I recently had the opportunity to pose Dmitry, who is currently studying for an art degree in Belarus, a few questions regarding his first full comic book.

Also, see below for a chance to win a copy of the book. SA: The Shadow of the Cross‘s setting and grounded tone are somewhat atypical of the comic book medium. Where did the idea for the book come from, and why did you choose to bring its story to life as a three-part graphic novel?

DY: Yes, watercolours are seldom used for comics or graphic novels. I drew a couple of pages in digital art, but I didn’t like the style and decided to mainly use watercolour for the novel, although I also used digital art for some scenes.

The idea came by accident. I saw an article about the Cathars and I discovered that they left a big legacy in medieval history. I went on to read about the siege of the Castle of Montsegur and all pieces of the puzzle came together in my head.

I imagined 3 stages of self development. The first one is imprisonment (when you are a prisoner of your own mind), then comes awakening, like when you suddenly see a universe inside you. And finally, purification. Cathars had the same stages in their spiritual teachings. This is your first graphic novel effort as creator. What creative struggles did you encounter taking on the entire script-to-art storytelling process?

There were some difficulties in the beginning when I was not sure about the style and the first scene. I also had to understand what size of paper sheet I needed for a panel or page.  But as soon as I did several pages, the others followed fast. The hardest pictures were the ones where I needed to draw characters separately and then insert them to a specific background in photoshop. On average, I can draw a page per day, but sometimes I have to think deeply about composition for a couple of days and then I paint only after I had a clear vision in my head.

How did you go about researching the book’s realistic characters and historical architecture?

I have to say there are some things which turned out to be historically inaccurate, like architecture styles, but i was more concerned about the mood and the atmosphere inside the graphic novel than doing 100% accurate images.

As an example of what I’m talking about: I used reconstruction references for Montsegur Castle but modified the surroundings a bit to show the siege scene from a more dramatic point of view. What’s next for the series?

The next instalment will be called Awakening and I hope it will help the readers understand the character and inner world of the heroes. It will also have a variety of new colours and scenes.

After The Shadow of the Cross do you plan to release more graphic novels? If so, will you stick with the historical theme or move into a more “conventional” graphic novel genre?

Sure, I feel that this genre is very close to where I see myself as an artist. I will do more graphic novels and not only historical. I plan to do something related to poetry after I finish The Shadow Of The Cross, something more abstract and hard to visualise, maybe because challenges attract me and I write poems.

Other than The Shadow of the Cross, of course, what recent comic or graphic novel would you like to recommend to readers?

I personally like Batman Noel, a graphic novel by Lee Bremejo, it is not an ordinary comic about a famous superhero, but a great interpretation of Charles Dickens’s A Christmas Carol. It has its own unique style, and every page will make you dive into the very dense atmosphere of Gotham City with its gothic architecture and peculiar characters. The Shadow of the Cross: Imprisonment is available now from Amazon, while some of Yakhovsky’s stunning watercolour works can be enjoyed at entaroart.com. This interview forms part of a promotional a blog tour.

Competition: Win a Copy of ‘The Shadow of the Cross: Imprisonment’

MadeGlobal Publishing have kindly provided me with a competition  copy of Yakhovsky’s book. To stand a chance to win it,  simply do one or all of the following:

Now come on, that’s not asking a great deal in return for a chance to win a free book, is it?

The competition winner will be contacted in two week’s time.