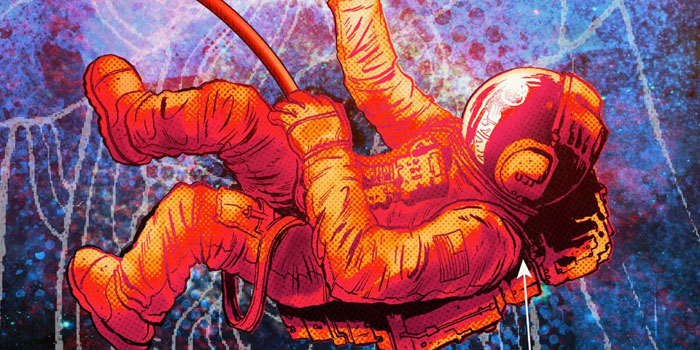 Supernaut, 215 Ink’s science fiction mindfuck from creator Michael David Nelsen, opens with its titular time traveller opposing God, who is about to “kill reality”, deeming it a mere construct of the mind. And things get only more bizarre from there on.

Nelsen’s first issue in this 5-part miniseries unfolds like a sort of Kirby-inspired Momento, a cosmic epic that persistently steps back in time to further elaborate on just who the Supernaut is and why a band of world-hopping rogues are travelling through the universe to stop their Divine Creator.

Supernaut will likely garner comparisons to Grant Morrison’s more out there works, but I that’s perhaps due less to its content than the fact that this first issue feels like the work of restless veteran, a creator who’s tried everything else and wants to break every convention and formula possible. That’s mighty impressive when you take into account that Nelson only has a handful of published comics under his belt. Supernaut is demanding, but not incomprehensible or pretentious, criticisms that often (and justifiably) befall Morrison’s work. The story in issue #1 alone spans (in reverse) the end of time through to extinct alien races and the “real” lunar landing in 1968, but its narrative remains relatively easy to follow. For now, at least.

I didn’t know what to expect from Supernaut #1, and was blown away by its multifarious concepts, ambitious scope, and Nelson’s vibrant and equally turbulent visuals. Hell, even the graphic design work surrounding the story – something that comic appreciators so often overlook – is outstanding.

While it has the potential to fizzle out at the second issue, as such high concept series are wont to do, Supernaut may well prove a career-maker for Michael David Nelsen and a flagship title for 215 Ink.