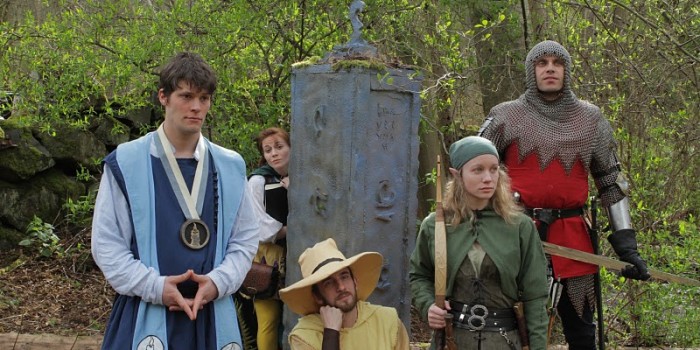 Ben Dobyns, the head of Zombie Orpheus Entertainment, the team behind the JourneyQuest webseries, discusses the art of making serial shows for an internet audience with Sphinx Group’s Lys Fulda. Q: Zombie Orpheus- There are a ton of webseries under that umbrella. Fill me in on the projects.

We’ve grown from a company creating a single webseries, JourneyQuest, to a cooperative of producers who work together to help everybody succeed.

JourneyQuest is the brainchild of Matt Vancil, a fantasy comedy set in the fictional world of Fartherall. Launched in 2010 under a new distribution model, the show was released for free online under a Creative Commons license. Fan contributions paid off all season one expenses in under a year, allowing us to launch a season two Kickstarter campaign that raised $114,000, an unprecedented amount for a web series at the time. Season two expanded the size of the world, introducing new characters, epic new locations, and  a major leap in production values. Continuing the Fan Supported, Creator Distributed model originated in season one, season two saw Fran Kranz (Dollhouse, Cabin in the Woods) and Bob Sapp (Conan, The Longest Yard) join the Seattle cast.

In addition to JourneyQuest, ZOE produces a semi-weekly webseries entitled Rude Mechanical, which fictionalizes the backstory of our production company, allowing all of us to play warped mirror versions of ourselves as we keep the fans up to date on happenings at the company. Featuring a transdimensional traveler named Zoe Adastra, who brainwashes the members of Zombie Orpheus into believing that she founded and owns the company, the show is a unique blend of news and farce, like 30 Rock with 100% more aliens, academic adventurers, and off-the-wall sci-fi.

We also provide production resources and help co-produce several local shows, most notably &@, the literary id of the World Wide Web, which just premiered its most recent masterpiece, &@ Hamlet.

Beyond ZOE’s productions, our cooperative of shows has grown to include

Although each is produced independently, the ZOE collective promotes each others shows to the fan base, shares booths at conventions across North America, uses a common base of technology and a common cooperative philosophy, and operates FanSupported.net, a fulfillment resource that offers the best net return to producers for sales on the web. With the idea that equal cooperation can reduce costs, the group has been able to drop the cost of fulfillment below the amount it would cost for each producer to handle independently, putting those additional revenues back into more production.

Embracing crowdfunding and giving the fans the power to keep shows that they love alive, ZOE cooperative shows renewed so far for second (and third!) seasons by the fans include JourneyQuest, Chop Socky Boom, Standard Action, Transolar Galactica, Aidan 5, and Gamer Chick.

Q: What makes Zombie Orpheus different from shows on Hulu or cable TV?

Our shows are entirely ad-free. We focus on creating a phenomenal viewing experience for the fans, who show their support with contributions that far exceed what traditional advertising pays per thousand impressions.

Additionally, our shows are entirely owned by their creators. No third party exists who cancel them, empowered the fans to keep the shows they love alive. Our motto is No Studio, No Network, No Cancellation, which is our promise to the fans that we won’t put the fate of our shows into the hands of third parties. This gives the creators of each show an unprecedented freedom to produce with a unique and unfiltered voice, rather than attempting to appeal to a mass market.

Q: Journeyquest 2 City of the Dead just hit DVD April 24th. Can anyone pick this up and follow what’s going on?

Yes. We designed the season carefully to stand on its own, although people familiar with the first season will certainly have more of an investment in the characters and ongoing story. We highly encourage people to check out Season One for free online. Q: What was it like working with higher profile people like MMA fighter Bob Sapp and Cabin in the Woods star Fran Katz?

Bob and Fran are both collaborative and giving professionals. Working on set with them was a joy. Fran especially, with his massive television experience, was able to lead by example and teach us a ton about how to keep the filmmaking process fun and cooperative within the context of quickly paced shooting schedules.

Q:  Why do you think the fan support for your projects has been so strong?

Support has been strong because we explicitly empower the fans to support content that they love. So many people were burned in the prior decade by the cancellations of beloved shows. We participated in the time and effort that fans put into saving doomed series like Firefly and Jericho and, from that experience, learned that there is no reasoning with studio and network executives. By putting the power to keep shows they love back into the hands of the fans, we show that we trust our fan base, that they do have the power to get an entire story told, and that the process can be mutual and collaborative, rather than run by top down decree. Also, we’re producing quality work with a unique and appealing vision. Our production values are outstanding for the budget level at which we work. We take the time and care to get the scripts right, to craft extraordinary performances, and to design and build immersive and believable worlds. And despite the fantastic genres in which we work, we keep everything grounded in accessible and honest human emotions and desires.

Q: What projects or developments should people pay attention to in the next 6 months.

We’ll soon be launching ZOE Phase II. In the works for over four years, this is the next step in crowdfunding and sustainable support. Taking the lessons we’ve learned from accepting direct fan contributions and through our four successful Kickstarter campaigns, we’ve created a support model that will allow us to remain in production constantly without becoming a financial hardship to our fans and supporters.

In conjunction with Phase II we’ll be launching a number of exciting new projects:

Q: What is the one geek related item you possess that you would fight 16K Bob Sapps for?

We wouldn’t fight Bob Sapp for anything. But we might stare sternly at him if he ate the last cookie at craft service. Or go make more cookies.

One thought on “Interview with Ben Dobyns of Zombie Orpheus Entertainment”