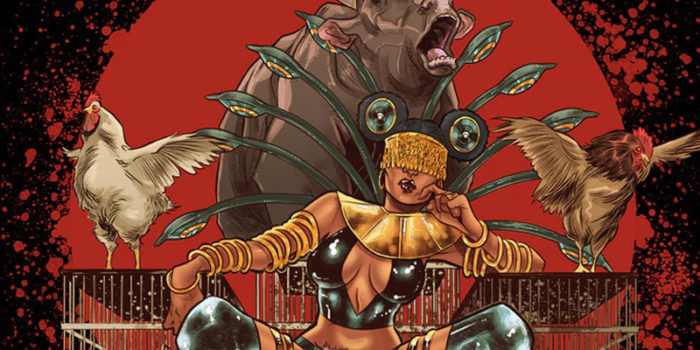 A few weeks back I reviewed the first issue of Murder, a new indie comic from Matthew & Brittany Loisel and Emilano Correa. This superhero series sees animals around the world begin to link telepathically, and retaliate against their oppressors alongside human animal rights activist The Butcher’s Butcher.

I recently asked Matthew about the series and its second issue, for which the team are currently running a kickstarter. At time of writing that kickstarter has 12 days to go and has raised over two thirds of its final pledge, so if the premise or interview piques your curiosity then check that out here and show them some support.

Murder has, at its core, extremely moral values and a conscientious message, but those values are wrapped up in some pretty graphic violence and superhuman characters that will likely appeal to a wider comic readership. When developing the series, how do you try and keep the balance between presenting a message and providing entertainment?

It was always on the forefront of our minds that this comic is for everyone, not just vegans or vegetarians. There are several other comic books with strong animal rights themes but in my opinion a lot of them preach too much to the choir. I don’t see any value in affirming vegan values, we want to challenge mainstream values but in a way that everyone can connect with. Even if you are a meat eater, you will be rooting for the animals in this story.

You’ve been teasing images of the Melanated Melody, a new character who makes her debut in Issue #2, and almost looks as though she’s from a different world to the Butcher’s Butcher. Who is she, and how does she fit into Murder‘s plot and themes?

Funny you should say she seems like she’s from a different world, the Melanated Melody will fit more cleanly into The Butcher’s Butcher storyline than the animal uprising will! But there’s a lot to be seen about how she fits into the Murder pantheon. We’re going to move faster in issue #2, revealing more of the story through clandestine missions that will require the powers of Alexsis, aka, the Melanated Melody.

While The Butcher’s Butcher can hear and communicate with telepathic animals, the Melanated Melody can withstand powerful soundwaves. She has enhanced melanin throughout her body that protects her from the sonic attacks she dishes out through speakers she wears as weapons. Melanin, the pigment that gives color to human skin, has a myriad of uses and abilities. One of those abilities is the absorption and diffusion of sound waves.

Both our superheroes will take the reader through themes about race, food and justice. Through their experiences we’ll examine the way food is produced and distributed in America, in particular, and around the world. People will learn a lot from reading Murder.

Issue #1 of Murder felt timely and personal, but also slick and commercial. What other comics have you guys and artist Emiliano Correa been reading that have influenced its look and direction?

We definitely studied the artwork in Animosity, a beautiful comic similar in plot and art style, by Marguerite Bennett with awesome art by Juan Doe. Writing the paneling so the reader will have a strong reaction to the animals is tricky, so we definitely read every issue of Animosity. I think they are on their third volume, so there’s a lot of material. I have a pretty steady diet of Jonathan Hickman and Brian K. Vaughan. Brittany and I are still recovering from Saga and don’t know if we’ll be ready when it comes back…

Lately I’ve been absolutely binging on Mark Millar. I’m so stoked on the Jupiter’s Legacy news because I was heavily influenced by that series while I was writing issue #2. I also just finished We3 by Grant Morrison, which basically was everything I could hope Murder may someday live up to. The stunning art in We3 is by [Frank] Quitely, who also drew some of the most jarring panels I’ve ever experienced in Jupiter’s Legacy. I can’t recommend either of those titles enough. If I remember correctly, I was reading a lot of Tom King, Alan Moore and Brian K. Vaughan while writing issue #1.

Emiliano and I are mutual fans of the Smallwoods when it comes to art style. We also call ourselves Jordie Bellaire superfans – literally anything she works on is beautiful and deep with mood and emotion.

You and Brittany are the founders of Lazy Millennial Farms, a veganic farm, and have a history in agriculture. How does that impact the series’ more grounded aspects, such as the first issue’s depiction of factory farming practices?

Our experience with animal agriculture is more of the free-range variety, which we will address in issue #2. A lot of what we’ve learned about factory farming has come second-hand by people in the industry who have either worked in or toured industrial farming facilities. We’ve also been in touch with undercover animal rights activists who actually get jobs within these facilities to get footage of abuse. In fact, we will be interviewing one of these activists soon. That interview will be in the back-pages of issue #2.

As I noted in my review of the first issue, given how progressive comics and the culture surrounding them has become, there are surprisingly few comics that promote, or even deal with, animal rights or animal activism. Why do you think that is?

While I think comics have always been political, political stances against racism, sexism and other forms of bigotry are definitely more broadly appreciated than animal abuse is right now. But in the same breath, I think that is rapidly changing and veganism is proliferating the mainstream. Animal rights is certainly a touchy subject, which is why I understand why publisher and writers avoid it. There are a few indie titles out there, but in my opinion most published titles either pull their punches or are off target.

I believe that you’ve a 5-issue story arc planned. How would you like to see Murder, its characters and what they represent, evolve?

Yes, the first story arc will be over the first five issues, which will eventually be our first TPB. Murder is going to continue to challenge readers, but will also show more of the emotions and motivations of the parties involved, revealing the inner workings of this world that I think really piqued people’s interest in issue #1.

What are the cats planning? How are the dogs involved? What is The Butcher’s Butcher’s stake in all this? How does the telepathy affect the psychology of the newly linked animals? The first story arc will set the foundation for the world to really spiral out of control, all because our food fought back.

One thought on “Interview: Matthew Loisel on ‘Murder’ and Animal Rights”