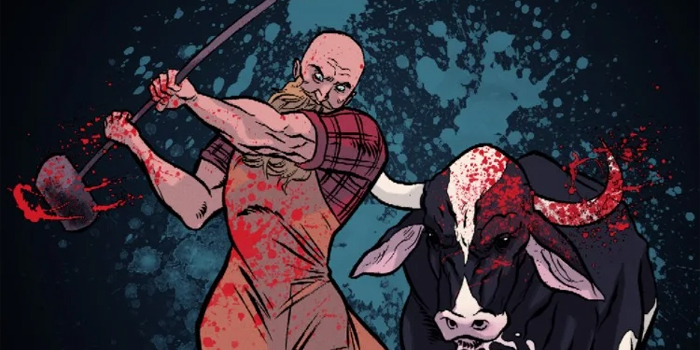 Given how much I tend to write about myself on Shelf Abuse, even I’m surprised by how seldom I mention my views on animal rights. Despite hailing from a family of proud meat-eaters I’ve been a vegetarian since I was ten, turned vegan about six years ago, currently have a home filled with recued rats that I treat like toothy children, and have spent the past three years researching the subject for my next novel.

I suppose I usually choose to keep my passion for veganism to myself because a) nobody comes to Shelf Abuse for it, b) I believe in leading by example rather than preaching to the deaf, and c) comics and veganism rarely seem to connect. The past decade has seen comics become a platform for every feasible minority group or sexual orientation when it comes to humans, but with a few notable exceptions (Grant Morrison’s Animal Man run, Aftershock series Animosity) creators rarely even touch upon the voiceless victims whose lives and welfare are forever compromised for the sake of dinosaur-shaped nuggets and faecal matter hamburgers.

Well, now we have Matthew and Brittany Loisel’s bold and exciting new series Murder, which couldn’t be more vegan if it tried. Murder presents a near future in which sentient domesticated and farmed animals suddenly form a psychic connection. Only one human seems capable of telepathic communication with them; a former factory farm chicken sexer turned lethal activist, who is helping his farmyard friends seek retribution under the pseudonym of the Butcher’s Butcher. I wrote “lethal activist” for want of a better term than terrorist, but I guess how the reader defines the Butcher’s Butcher will depend on their personal values.

A similar premise to Murder was seen Gerry Alanguilan’s Elmer, a harrowing but hopeful graphic novel that looked at the moral consequences, short and long term, of every chicken in the world suddenly gaining the ability to talk. Murder takes a decidedly more “comic book” approach to its concept, with artist Emilano Correar taking every opportunity to throw crimson splatter across the page. Despite of, or perhaps in spite of, the book’s moral impetus, this comic is shockingly brutal, beginning with the CEO of a processed foods conglomerate being gored by a bull. But perhaps this issue’s most hard-hitting scene follows, showing the births and, mere moments later, callous deaths of male chicks born into the egg industry.

The ill-fated chicks, much like the other animals in the book, communicate through basic emotions. This device that allows for a realistic expose into modern farming practices while maintaining the “sci-fi/horror” genre leanings on which the series is being pitched. The Loisels are the founders of Lazy Millennial Farms, apparently California’s first and only certified veganic farm, so I’m hoping that future issues will unveil other macabre animal agriculture practices with a similar level of authority.

As far as first issues go, Murder #1 gives us a lot to take in, including a flash-forward that introduces the Butcher’s Butcher, those stark scenes depicting the practices behind the egg industry, and a chess game between a dog and cat that hints at something more fantastical. There’s more than enough to pique the reader’s interest, but as these components don’t quite connect at present, much of what Murder’s premise teases at is reliant on future issues. A common shortcoming of indie comics whose creators couldn’t feasibly commit to a monthly schedule, I guess. Regardless, I’m more than ready for the second instalment.

The Loisels’ worthy intentions and Correa’s visceral art combine to produce a title that finds the perfect balance in providing entertainment and putting across a distinct message. Murder clearly has an agenda, but at no point does that agenda become the comics’ only selling point. You don’t need to be vegan or vegetarian to enjoy this brave and jolting new series… though I’d be lying if I said it wouldn’t help.

The first issue of Murder was released last October, and is available from collabcreations.bigcartel.com. A kickstarter to fund the second issue will be announced soon.