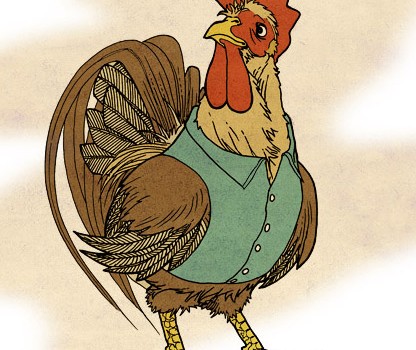 Gerry Alanguilan’s Elmer requires its readers to draw upon their ability to suspend disbelief. It’s the sort of book that, if you were to put it aside and apply a minimal degree of logic to its plot, would seem ridiculous to the point of unreadable. Yet Gerry Alanguilan fills his tale of talking chickens and their existence alongside us humans with such pathos and deft cynicism that it’s possible to accept that, if fowl did one day start talking and wearing suits, events would unfold according to his predictions.

We see these events develop in retrospect, as young rooster Jake, now living in a human society that begrudgingly respects the rights of poultry, studies his father Elmer’s diary. Elmer’s recollections of the first days of chicken sentiency – the chickens literally just gain higher intelligence one day, and are the only animals on the planet to do so – is recounted with a level of detail more in line with the finest science fiction literature than Babe or Animal Farm.

Elmer takes us through his first words, his relationship with kindly farmer Benjamin; who protects the animals from mass culling, and into the following years of intolerance and eventual acceptance. Alanguilan depicts the personal and global ramifications of this newfound chicken intelligence with an intimacy that not only makes the story plausible but genuinely touching. The perfect grounds for a good old fashioned analogy, then. While I’m not sure whether Elmer represents any particular historical period, such themes as racism, equality and forgiveness echo our past century and beyond. Alanguilan’s meticulous illustrations also purvey a sense of realism that you might not expect from the synopsis. It would have been so easy to opt for the “cartoon chickens in the real world” aesthetic, but his art is cohesive enough to create a convincing world in which man and chicken coexist (relatively) peacefully. I did occasionally struggle to differentiate the various members of Jake’s family, however, even if they do each wear distinct items of clothing.

While Gerry Alanguilan has worked for the likes of Image, DC and Marvel, Elmer was originally released in the Philippines by Komikero Publishing, 2006-2008, and has only now seen publication in the West by Slave Labor Graphics. It’s a great title to import, too; the Filipino backdrop makes for a fascinating cultural excursion, while Alanguilan’s storytelling sensibilities are universal.

I really can’t say enough kind words about Elmer. Alanguilan has crafted a story that could only exist in the medium of comics, a study of humanity’s compassion and intolerance that resonates long after. Read it.