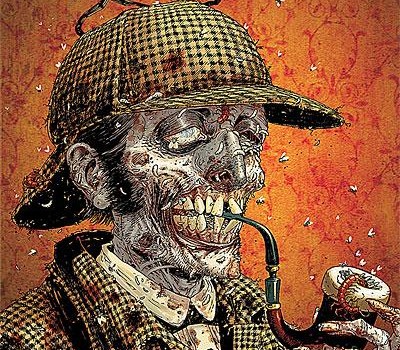 Yet another entry built from the “classic fiction + zombies = junk culture irony” formula, Victorian Undead takes the world’s greatest detective and – if the superfluous “Sherlock Holmes vs. Zombies!” does not already made it clear enough – pits him against the hordes of the undead. But just in case that wasn’t enough, Ian Edginton throws in a luminescent meteorite, killer androids, a hi-tech secret military and all manner of steampunk malarkey.

Yet it’s Edginton’s penchant for throwing everything into his big postmodern pot that lifts Victorian Undead ever so slightly above most other modern works that implement zombies or vampires into pre-existing fiction. This colourful romp sees Holmes and his stalwart companion Watson take on London’s ever increasing corpse population, and… well, there’s not a lot more to say of the plot, except perhaps that the zombies are being controlled by a certain arch nemesis who presumably perished alongside Holmes at Reichenbach Falls. Sure, Victorian Undead is dumb, derivative fun, but Edginton’s solid writing nails the tone. The discourse between Homes and a pleasingly capable Watson is pretty authentic; Edginton is currently adapting several original Sherlock stories into comic books, and he’s clearly picked up a knack for emulating Arthur Conan Doyle.

The art by Davide Fabbri, whose work has graced numerous Dark Horse Star Wars titles, captures both the 19th century period setting and the more fantastical plot elements – of which there are plenty. Carrie Strachan’s colour work is quite dazzling, transforming Victorian London into a gaudy landscape of emerald space rocks, roaring infernos and crimson-splashed cobbles.

Both Sherlock Holmes and zombies have been reiterated and reinvented far too often recently, and Victorian Undead throws few surprises into the usual formula. But the talent involved make this an   entertaining enough read that, impressively, feels like bona fide Sherlock Holmes. And with a mash-up such as this, what more could you possibly ask for?