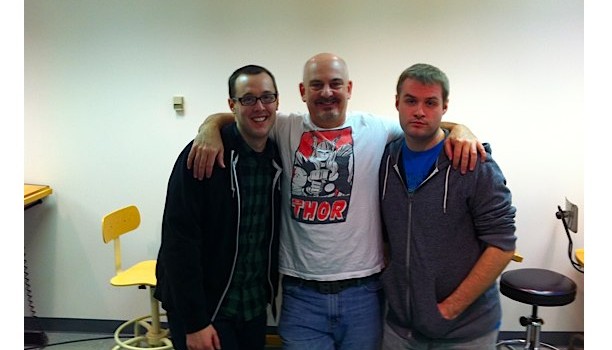 Press Release: “The Bullpen,” a web series about comic books and comic creators is now live on youtube. Webisodes can be viewed at the Cheapjack Shakespeare channel: www.youtube.com/user/CheapjackShakespeare.  New episodes will appear weekly for the next 8 weeks.

“The Bullpen” is a workplace comedy centered on the office of “Bullpen Comics,” a company started by three well-known creators. Unhappy with the restrictions and sure they can make more money and control their characters’ destiny, they set up their own shop only to find that creators don’t necessarily run a business well. The series creators know what they’re talking about as both have worked extensively in comics.

The series will feature Daniel Morris, Drew McCabe and Shaun McLaughlin as the creators charting their own destiny. Gabriel Benson and McLaughlin will produce the series. The conceit of the series is that the creators consider what they are doing to be so important that they feel they must record every minute of it for posterity, even if every minute includes someone deciding he’s more comfortable working in his underwear. Previously, the crew had worked on “Cheapjack Shakespeare: The Non-Musical” the stage adaptation of  “Cheapjack Shakespeare” which appears approximately five days a week on the website www.cheapjackshakespeare.com.  Collections are available at Drive Thru comics (comics.drivethru.stuff) and for the Kindle e-reader on Amazon. The partners are very close to announcing a paperback collection of the book and a motion picture adaptation.

Shaun McLaughlin began his career writing “Aquaman” (the non-maimed version) for DC Comics. He went on to write for DC, Malibu, Disney and Dark Horse. In 1994 he moved to Warner Bros. Animation where he produced over 400 episodes of television (5 Emmy Award Winners) including “Batman Beyond”, “Static Shock”, and the various incarnations of “Justice League”. Besides “Cheapjack Shakespeare”, McLaughlin is writing an animated feature for Omens Studios and preparing a live-action feature with Benson.

Gabriel Benson worked on numerous feature films that people might have seen during his years in Hollywood, including a lengthy stint developing Terminator 3: Rise Of The Machines.  Benson is also the writer of the graphic novels “The Ballad Of Sleeping Beauty,” “Fade From Grace” and the animated feature “Gene-Fusion” which will be released in 2010.   Gabriel is currently adapting Fade From Grace for film.  In addition, Gabriel is a marketing and business consultant for numerous small businesses.