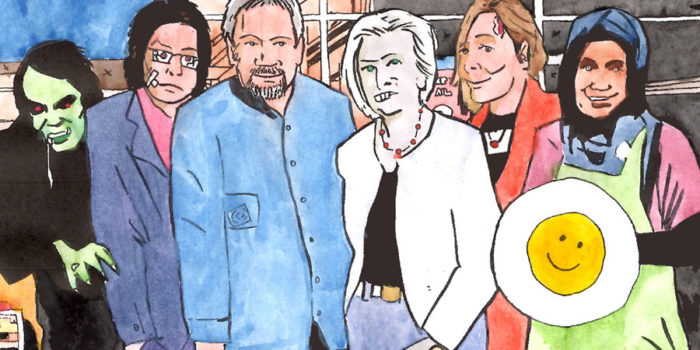 After a decade of writing these reviews on Shelf Abuse, it seems almost trite to remark that I’ve seen the comic book evolve in that time. Also, I’ve always found more pleasure in seeing the medium devolve, for want of a better term, as creators approach comics from fresh angles and origins. The grip that the same few big names once had on upcoming talents has gradually loosened, and those talents are beginning to realise there are far less rules or barriers than the pros would have them believe.

David Robertson is one such talent. Break the Cake contains over 30 short strips that follow no consistent theme or format, but are nevertheless held together by a nonsequitous streak, one that often feels as though it derives from a conscious aversion to conformity. Robertson is a prolific Dundee artist who has self-published several similar titles, written for numerous comics publications and supplied work for dozens of anthologies. He knows the form, he knows how the reader expects each short comic to end from the first few panels, and he does everything within his varied abilities to defy their expectations.

This collection would inevitably be described as pythonesque were it not for Robertson’s personal touch throughout. His more autobiographical pieces convey a rich sense of time and place. My favourite, ‘Tea Break at the Razor Factory’, is a single-page rumination on the author’s envy towards those that have an existential mid-career crisis after they’ve made a ton of cash, and proves weighty despite its brevity. Even the tributes to typical comic fan fodder such as Star Wars and Star Trek, the latter featuring wonderful art from Norrie Millar, possess an element of the autobiographical or the experimental that distinguishes them from comparable self-published comics.

Other strips are decidedly more bizarre, such as the numerous collaborations with other indie artists and even ideas by Miles (9) and Ethan Robertson (11) brought to life to baffling but charming effect. Some of these pieces are a lot of fun, some feel like creators playing with new materials or approaches, while others do feel as though they’re excluding you from a personal joke. There’s a sense of abandon throughout, like early Crumb and Pekar given a Scottish twist. The back cover depicts a birthday cake being bludgeoned into mush by a hammer through three sequential photographs, because… why not?

No single strip in Break the Cake is essential to the book, but together they form a unique and, almost against its creator’s will, consistent narrative. The book’s persistent sense of playfulness often makes it feel like a platform for David Robertson and company’s random experimentations, strips that might not find a home elsewhere. I do not say this as a criticism – while Break the Cake will flummox many, it embodies everything I love about British self-published comics, contained within a neat little package, and I urge anyone looking for something truly different to check out Robertson’s work.

You can find out about David Robertson’s books and numerous current webcomics at www.fredeggcomics.com.