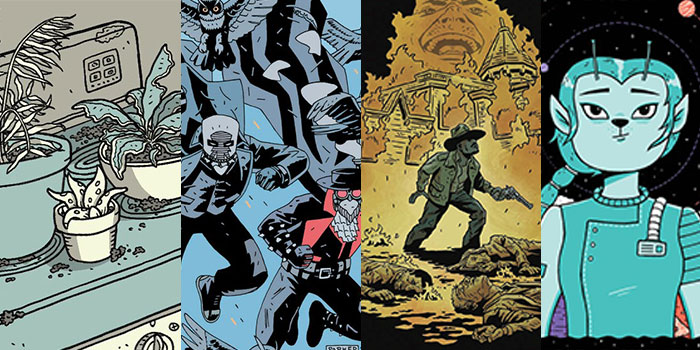 My first Indie Penance of 2019 is still trapped in the oh-so distant past, featuring three kickstarters I backed in 2018 and yet another fine Avery Hill release that I felt demanded a mention. Hopefully I might soon find myself in a position to highlight new comics. Wouldn’t that be nice? Enjoy!*

*also feel free to not enjoy, or even sit proudly somewhere in the middle like the rebel you’ve always wanted to be.

At a mere 24 dialogue-light pages, Greenhouse is over no sooner than it started, but Fong’s intimate art, inspired compositions and gentle pacing make for a darkly beautiful psychological study.

Greenhouse is available from pommopress.com.

When Dr Crowe travels to London to solve a Whitechapel murder, he initially suspects the hulking Merrick, on a detective journey of his own. After the obligatory violent disagreement that’s par the course for such team-ups, the two must join forces to vanquish a winged beast that is picking off London’s public.

There’s nothing comic fans love more than debating who would beat who in a punch-up, and Birds of Prey makes for a fun and surprisingly charming adventure. On numerous occasions I’ve seen Corey Fryia’s artwork criticised for unabashedly wearing its Mignola influence on its sleeve, which is probably fair, but there’s no denying the guy makes great looking, dynamic comics, and the whole thing is far more enjoyable than many of the superhero dream matches that inspired it.

Physical copies of Merrick & Crowe #01 are available at www.merrickcomic.co.uk.

I backed the kickstarter for Headspace last year, a digital edition of the 2014 series now available physically through IDW.

Sheriff Shane Garretty is the only authority in the surreal town of Carpenter Cove, where nightmarish creatures, anthropomorphic animals and something resembling small-town America collide. When Garretty discovers that Carpenter Cove and its inhabitants are all fabrications within the mind of Max, an escaped serial murderer and victim of a secret government experiment, the imaginary lawmaker must journey deeper into Max’s subconscious to foil his real-world actions.

Ryan K. Lindsay’s (Negative Space) story harks back to the works of Philip K Dick and a more philosophical, metaphysical era of sci-fi. The art, by Eric Zawadzki (Eternal) and Sebastian Piriz (Dark Beach), is regularly incredible, with the stark laboratories and brutal violence of the real world counterbalanced by the sheriff’s passage through Carpenter Cove, which becomes ever more abstract and nightmarish as Max’s psyche unravels.

Given the high concept, it’s a pleasant surprise that Headspace also manages to stick the landing. An astonishing achievement, really, that deserves a far greater reputation.

A refugee of the irradiated planet Doma, young Flint yearns to leave the mining colony of Tisa that her family have been forced to call home. As the young girl becomes a teen, then an adult miner, her restlessness to leave the colony in search for her own kind grows only stronger.

Eisner Award-nominee Kristyna Baczynski’s sci-fi epic is light on science and big on feels. The use of different colour schemes to resonate the distinctly different stages of Flint’s life is sublime, and Baczynski’s world is, much like the best comic worlds, both highly improbable and instantly recognisable.

Once I’d acclimatised to the book’s straightforward coming of age analogy, Retrograde Orbit didn’t present much in the way of surprises, but it’s nonetheless a painstakingly illustrated, provocatively designed and genuinely touching journey. Baczynski’s first long-form work is also quite possibly the best 2018 release to gift a younger comics reader or creative who’s yet to discover the artform beyond the Big Two; it just might be the book to send them on their own rite of passage.