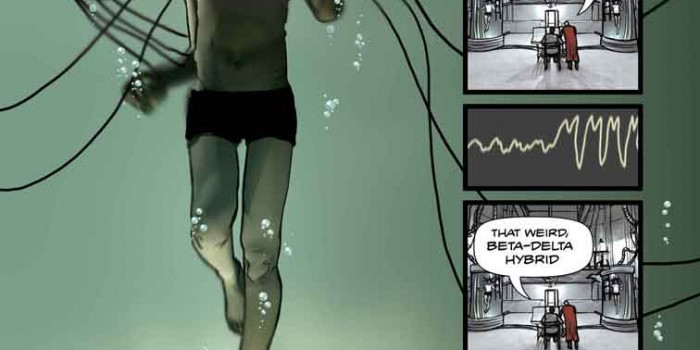 A few months back I reviewed Dr. Ed Park’s Maximum Lifespan, an intelligent and multifaceted sci-fi thriller set in world where medical technology is close to unlocking the secrets of immortality. Ed, a Californian physician practicing Ob-Gyn, Laser Aesthetics and Anti-Aging, financed the book himself, and it has to be one of the slickest self-published packages I’ve ever read.

I recently spoke with Ed about the trials and tribulations of self-publishing, as well as the real world science behind his first (and possibly last) graphic novel. Read the Maximum Lifespan Graphic Novel Review here.

CD: Maximum Lifespan originated as a film script. What prompted you to rework the script into a graphic novel?

EP: Well, I guess I would say I went through the whole thing of wanting to be a screenwriter, and I wrote a few screenplays and a teleplay, and then I went and tried to pitch them to Hollywood and it turned out to be really difficult. They were making a load of graphic novels into movies, so I figured that would probably be a good place to do that. Some of the elements in Maximum Lifespan are based on current medicine, such as the use of telomerase. How much of the book was art imitating life, and since writing it have there been any breakthroughs that have been a little too close to your predictions?

One of the things I liked most about Maximum Lifespan was that the book examined the ethics of anti-aging from numerous perspectives. Yet I found it odd that despite your medical background your antagonists are mainly scientists. What exactly is your stance on immortality through science?

Well, I don’t really have a stance. I wouldn’t say I’m a really great writer, I’m self-published so it’s not really professional, but I would say that when you write, initially you write for yourself. There’s a lot that gets out there in terms of ideas, and tends to be wordy and didactic, but by the time I had reiterated this story, you know, I don’t really have an opinion. I just kind of write and the characters, as trite as it sounds, say what they want to say. I mean, I’m all for immortality for me. I don’t know for other people if it’s such a good idea.

What were your greatest obstacles in self-publishing, and do you have any advice to impart to any other comic writers/artists looking to self-publish?

The greatest obstacle is time. I mean, who has the time to do it? Time being equated with money, like energy and matter, it was very expensive to do.  I had to pay the artist [Jove Leksell] in Sweden. It’s a very costly vanity. So yeah, I wouldn’t advise people to do it. But nowadays, because they have the iPad, and I have an app that you can use for that, it really doesn’t cost anything to put up an iPad comic book, which is for all intents and purposes as good, and sometimes better, than print.

So that’s really going to change everything, I think. There’s going to be a lot more voices out there, because of just the ease of publishing. Certainly you have to write your own app, unless you go through iBooks – since iBooks is ePub based it doesn’t translate well with the images – but like I said I have an app which I wrote which will allow people to simply replace images, and you can get that on the iTunes store fairly easily.

How has the Maximum Lifespan eBook been received compared to the traditional hardback edition?

Oh, yeah, that’s been tough. I think that it’s hard to drive sales. I can drive of lot of traffic to the website, but for people to click on “purchase” is difficult. I hired a digital rights management company called LockLizard. They’re in the UK, and they did this amazing job, but people are very loathe to install applications off the internet. So that was really a problem. I may have attracted tens of thousands of people, but they cursed me up like “you expect me to download your frikken DRM software, forget about it”. And rightfully so, there’s a lot of spyware and malware, and things like that out there…

So I’ve given up on the eBook, to answer that question, except for the iPad version, which is again no cost to put out there. People did not want to install that Digital Rights Management software.

How did your partnership with artist Jove Leksell come about?

Well, I just put up an ad on some of the freelance sites. And you know, it’s a cliché, but there’s no shortage of starving artists, so I got tons of interviews. But his was so far and above everybody else’s, because he’s kind of a genius I think, he’s a very right and left brained guy. He’s really great at maths, and he’s an amazing artist… I just can’t say enough about the guy. He basically wrote from scratch a 3D program for the interview, and it consisted of this amazing consciousness transfer lab, which was just crazy, and he and his brother were kind of closet philosophers, they delved deeply into science fiction, the whole idea of what makes us human. So just in terms of ideas and execution it was really easy to select him.

If you could go back three years and do things differently, would you?

Are we talking about the book or bringing it to market?

Well, Carl, it took me a long time to do it. Writing the screenplay takes time, and bringing it over that’s kind of the fun part. Jove did all of the illustrations, but it’s a lot of work, especially because we reiterated it into eleven languages. I had to have it specially translated, and all those bubbles I had to do manually. Unfortunately that is the most efficient way to do it – I’d written with the help of a program to Google translate everything, but that just ended up being kind of useless; the machine translations are kind of gobbledygook. But I think the biggest thing I wouldn’t waste my time with is Digital Rights Management software. Because, when you first do this you think people are going to steal it, and then you realise that if you’re self-published you can’t even give it away. So I wouldn’t waste my time with the eBook version, in retrospect.

I would have also made it much clearer who was who and where the scene changes were, but because I was coming from a screenwriter background those things were like the cardinal sins – to put voiceovers, to put text showing a change in scene. Those were the cardinal sins, but it probably would have helped a lot.

That’s often the problem with comics. People are so used to the 20-30 pages a month format that they want the story delivered up front.

Oh yeah. But it’s not a story that really lends itself to serialisation. Jove’s execution is brilliant, I think, but it’s a little hard to get into the story. The fast paced aspect of the earlier part, the recollections of childhood, it doesn’t really work as people can’t identify with who these people are. But I think on screen it would work better because there are a lot of non verbal cues, and it would mainly be played out emotionally.

Outside of the science behind your work, what writers/comics have influenced your own writing most?

I like Neil Gaiman, he’s really interesting. Grant Morrison, I really like his sensibility. I like Robert K. Vaghan and Robert Kirkman, who did the Walking Dead. I think [the term] “graphic novel” is kind of a wide open thing, so literally I got the ‘Graphic Novels for Dummies’ book, and I got Scott McCloud’s book on comics, and that was really good because it gives you a cognitive framework on which to build. But as far as the execution of it, it’s really, I think, most like film directing, because you have to call shots, and obviously the language is there. There’s so much that can be said with a picture, by the way you do the “camera”. So that was really the fun part in collaborating with Jove. I would say that “establishing scene” or “shot from above” and he would do his thing. It was just a really fun interchange.

Do you have any plans for a spiritual follow-up, or another script/graphic novel project?

No, I do not! My plan is to write a novel, because I won a WorldFest Houston award, I’m very proud of this. One of my screenplays was about this philosopher, Hypatia.My plan is to novelize my screenplay about this philosopher, Hypatia. That script I won a WorldFest Houston screenwriting award for, which I am proud of. Hypatia knew the world was round, was a gnostic and a mathematician, and was murdered in a church, which is also very cinematic. So I was thinking of doing that. But a graphic novel is so labour intensive that I want to do just a text novel. It’s really different, I’ve found, from writing a screenplay, because that’s good training in terms of teaching you to write visually and limiting the dialogue, whereas the ability to give internal dialogue through the novel is really very liberating in a way.

Actually, I’m putting the novel back, because the guy who The Sea Inside and Vanilla Sky, Alejandro Amenábar, he just did a movie about Hypatia, which I’ve purposely not seen. So that I’ve kind of pushed back. I’ve told you about the telomerase interaction, well, I’m kind of going to write a ‘Telomerase for Dummies’. It will be called your Telomere Timebombs, so that’s going to be coming out in the next few months. I just have to let it leak out of my head, I guess.

For more on Maximum Lifespan, visit www.maximumlifespancomic.com for character bios and a 53pg sample. The full-colour hardcover edition is also now available from Amazon. Additionally, much of the science behind the book is further examined in Ed’s blog over at Recharge Biomedical.