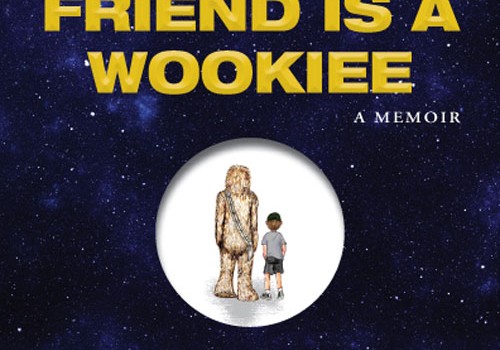 For reasons that I cannot possibly fathom, in the eyes of TV, film and literature, Star Wars and geekery were joined at birth. Following on from Fanboys et al is My Best Friend is a Wookie: A Memoir, One Boy’s Journey to Find His Place in the Galaxy, Tony Pacitti’s presumably semi-autobiographical novel of awkward adolescence and a galaxy far, far away.

So begins the real-life hero’s journey of Jedi Knight wannabe Tony Pacitti. In this hilarious coming-of-age memoir, our hapless hero sees Star Wars for the first time at the age of seven–and is never the same again. The epic film saga becomes little Tony’s moral compass, mentor, even psychologist, helping him battle the Evil Empire wherever he finds it.

He uses the Force to navigate the perils and pitfalls of childhood–from the bullies who badger him at the bus stop to the beautiful girl who mocks Obi-Wan and breaks Tony’s heart. Then George Lucas releases The Phantom Menace, and a disappointed Tony turns to the Dark Side of adolescence, falling in with stoners and Goths and nu-metalheads so lame even Jar Jar Binks would shun them.

However, armed with the sense of humor of Han Solo, the will power of Luke Skywalker, and the wise attitude of (a much younger) Yoda, Tony grows into a man worthy of riding shotgun with a Wookiee.

Pacitti, of Pandemonium Comics’ RoboPlanet and The Silencer, says of the book: “For better or worse Star Wars has always managed to pop up for every milestone in my life, from moving to a new town when I was seven to the wake of an over-before-it-started romance in my early twenties. It was my one constant as I tried to make sense of the world and my place in it.”

For more on My Best Friend is a Wookie, visit the publisher’s page at www.adamsmedia.com/wookiee/, or Faceboook them at www.facebook.com/adamsmediapublishing. My Best Friend is a Wookie