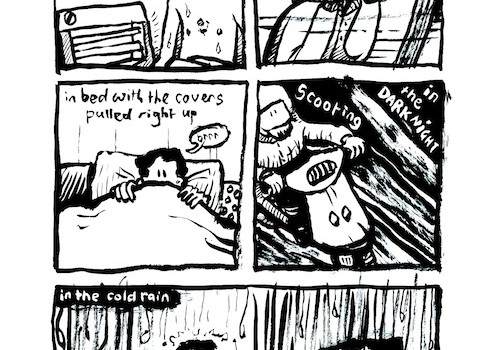 In the second of what should now be a regular mini-reviews post, I’ve selected a trio of indie titles that have piqued my interest over the past few week. Stylistically, they couldn’t be further apart.

First up is Star Crossed Galaxy from Twilight Pop Productions, the first issue of an ongoing space opera by writer Ryan Keyworth and artist Matt Martin. Taking place “500 years after a massive interstellar plague outbreak that nearly wiped out the galactic population,” the series follows Captain Joseph Cull and his eclectic crew of mercenaries as they go pirate hunting. Keyworth and Martin have created a universe that owes more than a little to a certain other galaxy far, far away, but the character designs are striking and Justin Williams’ stellar inking conjured up memories of such 2000AD classics as Bad Company. At a mere 14 pages there’s isn’t really enough time to get to know any of the characters, but fans of Firefly and, um, Ice Pirates (it’s okay, there’s nothing to be ashamed of) should find plenty to enjoy here.

Star Crossed Galaxy is available from Indyplanet and Drivethru. Or visit the TwilightPop blog for more.

From Brighton artist Paul Davies comes this collection of nine affectionately told graphic shorts. Davies’ stories are broad in style and subject; from a love story between a circle and a triangle to a moment of tranquillity between a shepherd and a lost soldier in the Falklands, you never quite know what to expect next. What bonds Because I Am’s this disparate collection together are Davies’ storytelling sensibilities. His art is modest but enthralling and his narratives themselves each evoke a unique emotion as much as they tell tales.

Crosbies.co.uk has a preview of the book, which is available to buy at Lulu.

The Dream Quest of Randolph Carter The Dream Quest of Randolph Carter

Cutting is looking to be pretty busy over the coming months, with a graphic biography of a Poet who succumbed to MS last year that will be funded by the Crossroads Care charity. The second part of Randolph Carter is expected to be online before November.

Read the comic over at www.theillustratedape.com