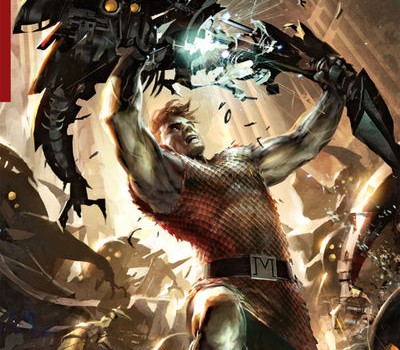 With Dark Horse’s new retro-fitted Magnus: Robot Fighter, Jim Shooter takes us back to the year 4000 and the futuristic city of New Am, a technological haven where robots fulfil every duty from policing the streets to working as effeminate robo-butlers (presumably preset with English accents). But the machines are also implemented in crime, acting as “thug-bots” for human gangsters, a threat that only robot fighter Magnus is capable of thwarting. Magnus was raised from an early age by an AI named 1A, see, who forged him into a physical and mental paragon capable of destroying droids with his bare hands.

In fact, Magnus is so efficient at dispatching with rogue robots that he requires neither weapons nor trousers, instead fighting crime in a red dress so short that it makes Zapp Brannigan’s uniform look macho in comparison. But Magnus is not the only one who’s underdressed; the two female characters we’re introduced to in this issue – which deals with the robotic kidnapping of several wealthy humans – are both first seen leaping from bed in their lingerie. When Magnus’s long-time friend Leeja Clane finally does get dressed, the fiery redhead still seems determined to outdo Magnus in the scantily clad stakes. But hey, it’s easy to push such ridiculous dress codes aside when these curvaceous lasses (and, er, lad) are illustrated by Bill Reinhold, whose art is so convincingly retro that only Wes Dzioba’s fresh colours break the illusion that you’re reading a comic straight out of the 1960s. From dome-headed droids to New Am’s immaculate cityscapes the art is an absolute joy, and helps set Magnus: Robot Fighter apart from other po-faced reboots.

Behind the visuals, though, there’s not an awful lot to ‘Metal Mob Part One’. Jim Shooter’s adherence to the Silver Age approach to storytelling is admirable, but he doesn’t do a whole lot more with the character or setting than revisit the comics of yesterday. The welcome inclusion of Gold key Comics’ first ever Magnus story, originally printed in 1963, only serves to further emphasise that Shooter’s new series is more of a reiteration than a follow-on. While a more contemporised reboot would most definitely not have suited Russ Manning’s bot brawler, I felt that Magnus #1 needed to better justify the robot fighter’s return.