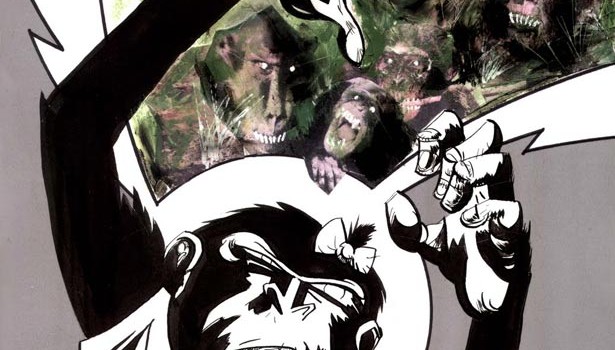 After a 7 year hiatus, Ken Knudtsen’s warped series about a transvestite monkey and his irritating young captor returns. The shifting planes of the indie comic market have meant that this delayed second volume was conceived as a graphic novel rather than initially printed as a monthly series and later collected into a trade paperback.

If you missed out on My Monkey’s Name is Jennifer the first time round and are wondering whether the plot is easy to follow, rest assured that there isn’t really a plot to follow. Instead, Knudtsen channels all manner of weirdness and rhyme as he takes idealistic Kaitlyn and her pet monkey Jennifer on a journey through time and space. Jennifer is actually a male monkey, neutered and cross-dressed into a flowery plaything for Kaitlyn – which I find more cruel than funny, but there you go – and would happily claw her eyes out given the opportunity. ‘Damn You, Sneeze Mucus’ sees Jennifer and Kaitlyn transported to foreign lands via Kaitlyn’s time-travelling cough medicine, provided by the duo’s nemesis Dr Tunick. Jennifer gets to meet his/her fellow primates, while Kaitlyn befriends a laser-wielding T-rex, and… well, you probably get the general idea. My Monkey’s Name is Jennifer is nonsense of the purest kind, with more than enough creative energy and offbeat humour thrown into the mix. Knudtsen’s art is similarly unpredictable, dynamic when it needs to be (and often when it needs to be anything but) and frequently borders on abstract.

At times, I personally found My Monkey’s Name is Jennifer: Volume Two to be a little too zany for its own good, but it’s an amusing little read that showcases Ken Knudtsen’s inimitable  talents. Should this second helping of Jennifer and company reach a wider audience than it did in 2003, I can see it accumulating a pretty devoted fanbase.