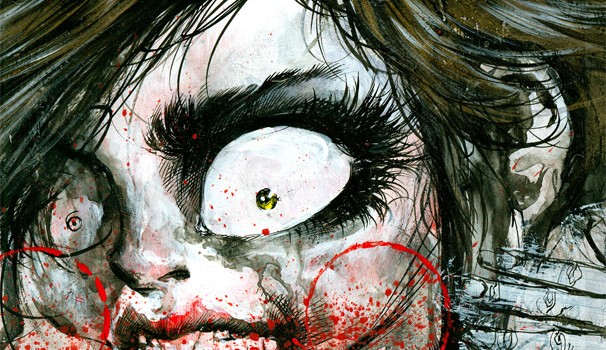 Toner #5 is the latest self-published offering from the innately talented Jonathan Wayshak. While he’s worked for mainstream publishers such as DC (the Ferryman miniseries, Authority: The Lost Year) and Image, it’s apparent why Wayshak has remained in self-publishing mode for the past decade. Toner is bawdy, perverse, irreverent, passionate and inventive; everything the mainstream comic industry superficially embraces but in practice shies away from.

This fifth issue sees the start of 13-part serialised story ‘Charlie’s Homecoming’, in which a young woman receives a message from her maniacal ex-boyfriend Possum, demanding to see her. We don’t yet know why Charlie so urgently wants to reunite with her partner from five years past, only that she has questions and he has answers, and that she’s willing to follow his mysterious orders to get those answers. In this particular issue, Charlie is required to consume a pile of donuts filled with contents unknown; a scene which Wayshak fills with more suspense and Lynchian anxiety than words would suggest was possible. Plot-wise, there isn’t an awful lot in the first instalment of ‘Charlie’s Homecoming’ to get one’s teeth into – and with Toner published at a rate of one issue a year don’t count on planet Earth still being here when it’s completed. But Wayshak’s series is simply a visual treat, replete with warped physiognomies and urban landscapes so densely detailed that you may find yourself getting lost in them. It’s tempting to compare Wayshak’s art to the likes of Sienkiewicz and Simon Bisley – the book is printed in a larger format that echoes British comics such as 2000AD and Toxic! – but his chaotic monochromic scribblings are entirely his own.

An assortment of extras is also included, the most noteworthy being an amusing 5-page short that if nothing else shows how far Wayshak’s art and knack for narrative has come in the last 15 years. I suppose the one obvious downside to Toner is that it’ll be another year until the next issue; yet as much as I’d love to see more frequent instalments of ‘Charlie’s Homecoming’, the series would arguably lose something if it became anything other than a self-published labour of love.

The latest issue of Toner can be purchased from Jonathan Wayshak’s incredibly slick portfolio website www.scrapbookmanifesto.com.